Do You Need Another Reason to Hate South Carolina?

Share All sharing options for: Do You Need Another Reason to Hate South Carolina?

Well, obviously not, but I'll still give you one.

In celebrating the various Red Cup Rebellion Hate Weeks, one must take a look at all things associated with our opponents.  Denigrating opposing universities, geographies, uniforms, traditions and--most importantly--people are all crucial elements of opponent hatin'.  So, let's look at the latter-est element there.

Who do casual to mildly-fervent football fans readily associate with the University of South Carolina Gamecocks football squads?  Well, it somehow isn't George Rogers, a name which is far less familiar to many outside of the Palmetto State than it should be (ed: seriously, how does South Carolina have a Heisman winner?).  Nor is it any player, really. 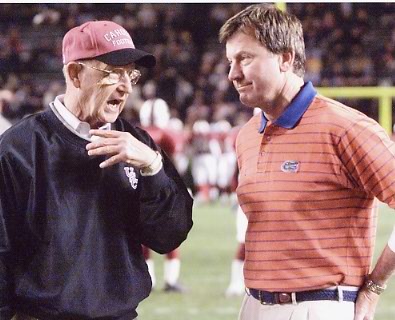 Now, the Ol' Ball Coach I'll leave alone.  Despite his difficulties in Columbia, he remains a great coach who has still held on to that smartass wit he became famous for in Gainesville, albeit a tamer version of it.

Lou Holtz though, that's a different story.  Lou Holtz is, after being simmered down into a thick syrup of pseudo-senility, everything that is wrong with college football.  Consider the following:

So, if you can't hate the Gamecocks for their football follies, delicious mascot, mustard-based bbq sauce (which, c'mon, isn't that bad), or overbearing sexual innuendos, hate them for having at one point provided Lou Holtz with a salary. 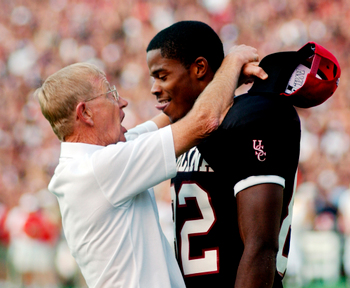