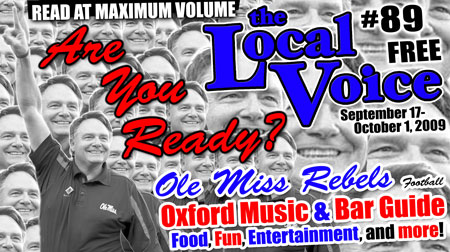 My grandmother used to always tell me, "You got to respect yo’self fo’ anybody else gone respect ya ass."  My grandmother was a wise woman who knew that self-image matters, respect often dictates success, and cursing at children leaves a more lasting impact than people are willing to admit.

Every day, we hear people talking about how college foot- ball fans outside of the national media don’t respect the Ole Miss Rebels. Time after time, our fans complain about other fans saying things like, "It’s still the same old Ole Pi$$." We, as fans of this university and its athletic pro- grams, know that to be untrue. This isn’t the same team that went 0-8 in the conference two years ago. It’s a team that could win a lot of games this year. But one year, this year, isn’t going to change a lot of minds unless the program itself appears to be in a better situation than it was then.

This brings me to the major point of this article. Attend games. Don’t just go to the Grove this weekend. I don’t care that we’re only playing the Southeastern Louisiana Lions. Go to the game. What do students do in the Grove? Get wasted and eat food someone else prepared. Call me crazy, but isn’t that was everyone does every day in this town? For heaven’s sake, Alabama had over ninety thousand people at their spring game. You know why? Because those people will never get an opportunity to see an actual football game at Alabama. It’s too difficult to find tickets there. There are wait lists for every game. Even Southwestern Northeastern China.

At LSU, students are forced into attending women’s lacrosse games in hopes of garnering enough "points" to be entered into the lottery for football tickets. Meanwhile, our "sold out" student section will likely only be full for the Alabama, and perhaps, Arkansas games. Even the LSU game is questionable because it’s the weekend that marks the beginning of Thanksgiving break. My brother—my own flesh and blood— is skipping that game for the opening day of deer season. Aren’t there, like, three months of deer season?

In this new book called Nudge, authors Cass Sunstein and Richard Thalercite the example of a com- pany in the U.K. that offers a 401(k) plan that doesn’t require employee contribu- tions. All the employees have to do is walk over and sign up. And over half of them have yet to accept their FREE MONEY because they are too lazy to walk over. My plea, is to walk over to Vaught-Hemingway, enjoy the game you’ve already paid for, and enjoy the benefits of a self-respecting football program.

When you don’t go to the games, you disrespect the team. If the national sports media respects our team, why can’t we, the fans who drink the Koolaid on a daily basis? So go to the Southeastern Louisiana game. And you know what? Go to some other games.  Get some friends together and travel to Columbia or Auburn or Starkville. It’s a long ride, but what else do you have to do?

Show your support for a team that deserves it. This is what we hiredHouston Nutt to do. He’s here to bring fanaticism back to our program. He has done his part, winning football games. Now it’s time to do yours. Or you could just sit back and let a chance to return to our prominence of the 1950s and 60s pass us by.www.RedCupRebellion.com ARE YOU READY?!