Said in a manner totally not meant to ruffle anyone's feathers or solicit laughter, let me just open with an admittedly moot point of reality - Southeastern Louisiana is off to one of the best starts in the program's history.  There.  Now was that so hard?  No, it wasn't.  (Of course, Southeastern only started playing football - again - in 2003.)  And neither will it be hard to tame the lions (Ivory 1, Credibility 0).

It's been pointed out once or twice by a contributing commenter that the Tangipahoa County Tabbies have won their first two contests convincingly - specifically, racking up sixty-nine points on Union (Ky.) College last Thursday night in what was, no doubt, the highest rated program in Hammond Public Access history and beating Texas A & M - Corpus Christie (abbreviated, interestingly, "AMC") 41-7 at Strawberry Stadium.

The fun thing about this feature when the Rebels are playing no-name patsies is that I get to feature the best player on the team, since most of you are unlikely to know much about individual players on terrible teams.  So, click that jump if you need way too much information about the Southeastern Louisiana Lions, and I'll tell you who is this guy: 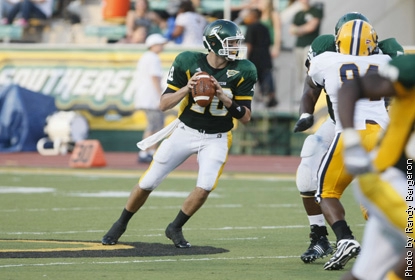 Ladies and gentlemen, I give you the pride of the pride - quarterback Brian Babin.

Now in his third season as the Lions signal-caller, Babin eclipsed the 5,000 yard career mark in their season-opener against AMC (see infra), and in the Lions two games has only improved his career touchdown-interception ratio to 45-13.  In one quarter of work against an obviously over-matched group from Union, Babin connected on 16 of 19 for 286 yards and five touchdowns.  In.  One.  Quarter.

That's how you earn that scholarship, baby.

Now I lay me down to sleep

And if he's benched in the first quarter, please,

He missed the Lions 2008 tussle with Mississippi State, to which I shall attribute without any evidence their loss in Starkville.  And SELA is, for all time, 0-10 against FBS schools.  So the heroics of Babin, if existent, are likely all for naught.  However, against our break-but-don't-lose secondary, Babin might make a few highlights that he can tell his strawberry-pickin' grandkids about.