Share All sharing options for: The Cup Countdown: Number 5

So I had every opportunity to go to the Florida game. And I didn't. A couple of my friends have ragged me about it endlessly, but I'm sticking to my guns. Sometimes, a man has to have some principles. I had reached the end of my rope with this Ole Miss team. I wasn't seeing the effort, the realization of potential that would have inspired me to drive 12 hours with Ivory Tower and his lame country music to watch my Rebels get waxed by the best team in the country. So I didn't go. I stayed behind and engaged in an athletic endeavor of my own. I played Ultimate Frisbee. I wrapped my broken left hand into a sweaty, medical tape club (Patrick Willis style) and vented my football frustrations by owning the shit out of some motherfuckers in flatball. It felt good; being trapped in the stands while you helplessly watch your team lose is pretty agonizing. I'm not a terrific athlete by any means, but it feels good for the actions and decisions to be your own, to feel the burn of a full sprint in your legs as you pull past another player and burn him on your way to the endzone. I was at peace...

When the Ultimate game ended, some guys from Tupelo that we played with (State fans, no doubt) mentioned that, hey, you guys aren't getting your asses kicked too bad in Gainseville. Shit, I thought. Not again. I had almost wanted to that the score was 28-0, Florida, shake my head in disgust, and move on with my day. No such luck. We all scurry to find a TV. A few hurried minutes later, I'm wringing my hands in front of a big screen at a bar. One of my friends bartends there, and opened up for business early on account of the game. So there we were, right after a Shene FG puts us within 7 just after halftime. Cordera Eason scores an acrobatic touchdown. McCluster squirts through the UF defense for 7 more. Somehow, we're up. At this point, it becomes obvious that Florida is Done Fucking Around. A big kick return and a quick score have the game tied up again. Ole Miss punts, then forces a punt, starting the pivotal drive of the game with 6:54 left on the game clock. Dex runs for 4. Bolden runs for 1. Third and five, most likely a passing down, and Snead has been inconsistent all day. Good thing for Kent Austin. Austin has noticed Florida's secondary creeping up on the run, sitting on short routes. Third and five. Game on the line.

Flash forward. May. New York city subway, 9:00 AM on Sunday morning. Ghost and I are leaving the sports bloggers' conference, bleary-eyed, surveying the riff-raff that usually occupies the tubes on a morning such as this. We're creeping along, stop after stop, when another train pulls up adjacent to ours. The doors clanger open, and a portly, poorly composed fellow stands up like a bolt. He darts his glance to the other faces on the train, and hiking up his cargo shorts, loudly proclaims "IT'S THE NUMBA THREE EXPRESS, (racial epithet excluded)!!!!!!!!!" He runs to the other train. Ghost and I follow. At some point, a month or two later, we're talking about the Florida game, and the conversation turns to that one play. Third and five. And Ghost pegs it. Shay Hodge. 86 yards for the score. The #3 Express.

Back to the barroom full of sweaty guys. Hodge blows by Major Wright. The room erupts. I high five someone. Hard. With my broken hand. Ow. But it didn't matter. The win was eminent. This one felt different. I want to say that it was at that point that I knew we had it. Thanks, Shay. That was pretty badass. 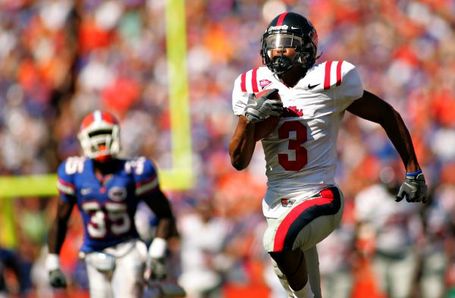