What does this potentially magical season hold for the Rebels?  Everyone and their mother have made their own predictions. From ESPN to your sister's Facebook page, 2 cents have come from near and far to be deposited in the mind of the willing Rebel reader.  If you have room for more, the contributors here at the Cup would like to take a stab at predicting the season over the next five days.  Mine are after the jump. 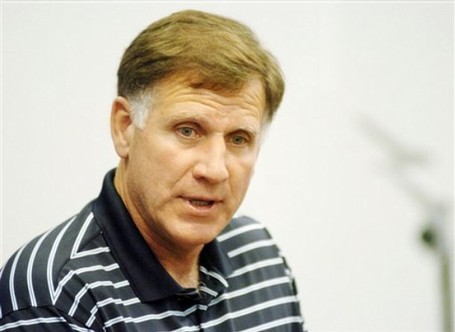 Oh Petey! You have led us to the promised land!

This game should be an easy win for the Rebels, and it will be interesting to see how the offense comes roaring out of the gate.  Offenses can be rusty on opening day, but I think Snead and Dex will be just fine.  In order to take the pulse of the offensive line, I'll probably be watching Sowell on offense more than I watch Jevan.

The challenge when playing Memphis is the same one we have seemingly every year:  How do we cover their tall receivers?  Can Marshay Green cover Carlos Singleton?  Covering 6'9" is a lot to ask for a sub six foot guy.  The answer:  does the Memphis qb have time to get the ball out of his hand?

My prediction: Ole Miss wins by 21.

What will amount to be a second off week in a row for the Rebels will not even be a challenge.  My eyes will be watching Jevan for about a half and then watching Nathan Stanley or Billy Tapp command the offense.  With a game looming just five days later, how long will Houston leave the first string in?  Otherwise, a pretty boring affair.

My prediction:  Ole Miss by 38

Media pundits like to say that  South Carolina is a tough team to play on Thursday night because they have played on Thursday x number of times since 2001 and have won x number of those.  Whatever.  It will come down to who executes better on the big stage.  A top ten team will head to Columbia on a Thursday, and the pressure will be on.  I just don't foresee the Rebels losing this game.

My prediction: Ole Miss wins by 10.

Believe it or not, I think this is the toughest challenge of our first four games.  Everyone will be circling South Carolina and Alabama, but what about the team that comes before those two?  The same one that has beaten us 3 out of the last 4 years.  Vanderbilt.  I think this is the trap game, but I think we are too good to lose this one.  However, the Ole Miss mentality has me rejecting a 4-0 start.  Sorry boys.

My prediction: Vanderbilt by 3.

The Crimson Tide may come into Oxford undefeated or they may not.  Who knows.  More than likely, both teams will be in the Top 25 and have one loss or less.  Due to the Houston Nutt style of play, I don't think we lose this big game.  It will be the biggest game I have ever witnessed in Oxford, and I cannot wait.  By the way, it is less than a month and a half away.  My prediction is based on Houston Nutt in big games, our stingy defense, and proven, elite quarterback.

My prediction:  Ole Miss by 7.

I'm not gonna waste your eyes on this one.

This is another game that really bothers me.  Out of the atrociously difficult schedule that Arky has to play on the road, we are just as likely to be beaten as any other of the teams.  Also, you know they are going to mess up and beat someone they shouldn't.  The offense Petrino is establishing will be red hot, but their area of concern will be defense.  Can Jevan pick them apart?  Can Dex slice and dice?  I have a feeling this one comes to the wire, and I think we are the better team.

My prediction:  Ole MIss by 3.

Auburn is such an unknown.  Their head coach has proven he sucks, they don't have a qb, and their staff is actually pretty decent.  I have no idea what that is the recipe for.  However, we should be able to win this game against an Auburn team that has more issues than Michael Jackson (too soon?).

Give me a break.  Another off week for the Rebels.

The return of Ed Orgeron to Oxford with his buddy Lane Kiffin.  There hasn't been this many losers in one place since the last Chi Psi rush party (zing).  Our offense will be too much, and our defensive line will eat whichever qb they put on the field.  Seriously, Jerrell Powe is still pissed about not eating fried Catfish at 12 a.m. anymore.

This game actually doesn't bother me that much.  We whipped them at their place last year, and I don't think they'll be much improved this year.  Their head coach doesn't have a clue, and Jevan is poised to keep the Rebels on track.  Go back to hell, Tigers.  We'll keep the Magnolia.

I see the Egg Bowl playing out something like this.  State receives the ball on the opening kickoff.  They use their spread offense to drive the field and score in just under 3:00 minutes.  The cow college fans ring their bells and shout profanities.  Then, the Rebels score 31 unanswered points to finish them off.  State fans make a t-shirt about their first drive and how it is an omen for the future.

The intro to this game has some explaining.  By default, we beat every SEC west opponent and only lost one SEC game.  Therefore, we strut into ATL for the first time.  More than likely, we will face the Gators.  They will get their revenge from 2008 and maintain their perfect season.

My prediction:  Florida by 10.

After this, we head off to the Sugar Bowl, just like Ed Orgeron promised!

There you have it... Straight from someone who doesn't know that much...  Feel free to debate.