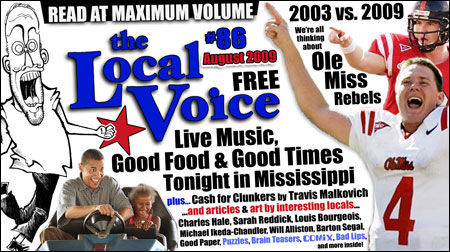 You've been soaking it all in for the last few months now.  Whether propagated by ESPN, your drinking buddies, or every body's favorite Ole Miss Rebel sports blog, you've become inundated with the idea that this upcoming Rebel football season could be one of the greatest ever.  There's talk of finally making the trip to Atlanta for the SEC championship game, an SEC Title (ok maybe not so much), and a Heisman Trophy for Jevan Snead (slow down, dreamer).


And why not?  These Rebels have talent all across the board, a coaching staff as competent as any we have had in Oxford in decades, and a very favorable schedule.  Despite the best efforts of our Rebels' detractors, this is a damn good football team.
But, how good?

When people think of the greatest Rebel teams of recent memory, two should readily come to mind: this one, and the 2003 version of our Rebels.  As most of you should recall--we understand if you don't--2003 saw a Rebel team led by Eli Manning fall a lousy three points short of a berth to a very winnable SEC Championship game.  A few miscues throughout the season kept the 2003 Rebels from legitimately running the table.  That was a good Rebel squad; there is no doubt about it.  However, despite the high level of success achieved by Eli and company, they were not nearly as complete a squad as we will see on Saturdays this fall.
Yes, we are suggesting that the 2009 Rebels are better than the 2003 Rebels.
While difficult, if not impossible to prove before the season starts, let's do our best to objectively look the upstart 2003 Rebels and the talented 2009 Rebels position-by-position.  Go:

Defensive Line: Strong Advantage 2009
By far the easiest assessment to make, the 2009 Rebel defensive line will go down as one of the most effective unit of angry-ass skull smashers to ever play ball in Oxford. The 2003 unit wasn't too bad, but they certainly weren't a strength of the team.

Linebackers: Slight Advantage 2009
The linebackers in 2003 left a lot to be desired in terms of speed. While Patrick Willis was technically on the team, he was having a year of eligibility thrown away on special teams in David Cutcliffe's seniority-based depth chart. Patrick Trahan, Allen Walker, and Jonathan Cornell form a solid unit, and there's a little more depth here than people think.

Secondary: Slight Advantage 2009
Texas Tech's BJ Symons passed for 661 yards against the 2003 Rebel secondary.  That is the third highest passing total of any quarterback in any college football game EVER.  While the 2009 secondary may be better--because it couldn't be worse--it's certainly not by much. It's funny to say this, considering how much Ole Miss fans despised him, but Von Hutchins was a good corner. He was just undercoached in a terrible, terrible defensive system.

Special Teams: Push
Johnathan Nichols, when not playing LSU, was perfect.  Joshua Shene is the conference's best placekicker, but he still hasn't shown that he can be what Nichols was.  What 2009's special teams may "lack" in kicking, it more than makes up for in athleticism and innovation.  Remember, Special Teams Coordinator, James Shibest, won National ST Coordinator of the Year in 2008.  He can scheme with the best of them.

Offensive Line: Strong Advantage 2003
Three of Eli Manning's five blockers are still playing ball in the NFL.  Enough said.  If the 2009 unit still somehow had Michael Oher, this would be a push.

Running Backs: Strong Advantage 2009
In 2008, the combination of Brandon Bolden, Cordera Eason, Dexter McCluster, and Enrique Davis was the 2nd most effective rushing attack in the SEC.  The 2009 Rebels return every single one of them. In 2003, the Rebels struggled to find an identity when running the football, causing many once reasonable fans to urge Cutcliffe and Company to let Eli throw on every single down.

Wide receivers: Slight Advantage 2009
Yes, we know that we're all supposed to be good Rebels and fawn over Chris Collins, Mike Espy, and Bill Flowers.  They were all good receivers, but imagine replacing two of those three with Shay Hodge and Dexter McCluster.  Yeah, thought so.

Quarterbacks: Slight-to-Strong Advantage 2003
Well that was an easy choice.  Jevan Snead is good; there is no doubt about that.  He is big, strong-armed, and became a very good decision maker towards the end of last season.  He has also shown great leadership abilities and proven to be fearless, even when facing superior competition.  However, he's not a Manning.  Eli Manning was the 2003 Rebels.  Quick, without looking, how many other skill players from the 2003 Rebel squad were drafted into the NFL.  If you answered zero, you're correct.  Jevan Snead has already lost one of his offensive companions, speedy wide-receiver and overall badass Mike Wallace, to the 3rd round of last year's NFL draft, and will likely join a few others when he eventually makes that jump.  Eli Manning was truly a once-in-a-generation type of player surrounded by an experienced roster of "pretty" goods and "alrights."  Jevan Snead is a once-in-a-decade type player surrounded by several "goods" and a few "very goods."  If these quarterbacks were to switch places, the 2003 Rebs would have ended up with an 8-5 record whereas the 2009 Rebs would be the preseason pick to win the SEC.  I know it's a wild and crazy hypothetical, but what in the hell else are we supposed to be doing with nearly a month left in the offseason?
Wow.  In looking back up at that, I never realized how truly woolly we Cuppers had become.  Yeah, we're calling it: the 2009 Rebs are, when all positions are considered, better than the 7-1, Cotton Bowl Champion 2003 Rebs.  Enjoy the rest of your summers while you can because, come September 6th, we will all be waist-deep in the throes of insane fandom.  This season is sure to be one of the most interesting Oxford has ever seen and we are more than happy to share it with you.