Share All sharing options for: Demarco Cox Picks the Rebs 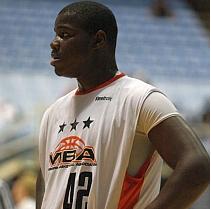 Andy Kennedy got great news Tuesday when 6'8" 275 lb. center Demarco Cox commited to play basketball for the Rebs. Cox is, from all accounts, a great player. The roundball rebs are sorely lacking in big men, and Cox should help immediately in 2010.

This is good for two other reasons as well.

He's raw, having only played football for a few months, but he shows a lot of promise with great footwork. Let's see. Who else was a basketball prospect until his senior year, when he played left tackle for the first time ever? Someone... the name escapes me.

Cox is saying he will only play basketball, but he may realize eventually that the money's in football. Personally, I love basketball. I would love to see him play both.

2. 2011 is a banner year in Mississippi basketballrecruiting, and we just signed two 2010 Mississippi players.

Ole Miss NEVER signs Mississippians in basketball. Coming away with two 4-stars in the 2010 class is excellent.

In 2011, there are eight Mississippians in the Rivals top 100. EIGHT. The rebs want three or four of them, and it certainly helps to sign players that class has played with.

So not only is Cox a great get immediately for the basketball program. He's also a chance at a good get for our football program. Couple that with the good will this fosters with the likes of 2011 five-stars Johnny O'Bryant and LaQuinton Ross, and Andy Kennedy has really helped the future of the program.