Share All sharing options for: The Cup Countdown: Number 7

Media Darlings: You know them when you see them. Some hot, upstart team gets an undue amount of air time, with various talking heads raving about this and that, pretending that, all of a sudden, Generic State University is somehow relevant or interesting. I remember how ESPN's guys gushed about MSU's cowbells back in the late 1990's. Not so much anymore. Maybe this year, they'll make a huge fuss about the Grove, The Walk of Champions, Chucky Mullins (all of which are cooler than cowbells, btw), though they could just as easily continue the party line of "Racism was invented in Oxford, Mississippi." But I digress...

Last year, Texas Tech had taken the media darling phenomenon to new heights. And why not? The only coach in America that Houston Nutt might describe as "a little off-kilter..." an awesome wideout who likes to say stupid things in front of cameras... A wide-open offense and a paraplegic defense, generating TV-friendly shootouts week after week... With the Red Raiders rolling to a 10-0 record, the media had no choice but to rain down the love on the Red Raiders. As a result, throwing tortillas on the field is cool. The bell ringer (no, I'm not linking the video) is cool...

Then, we start hearing about this guy: 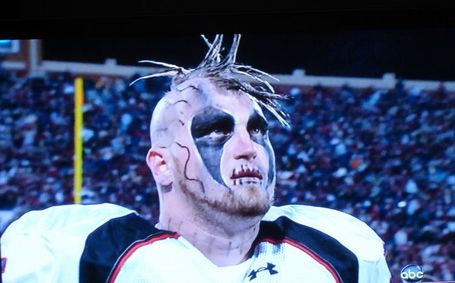 I get it. I wasn't cool in high school. I had some friends that got tired of being not cool, and started wearing black, dying their hair, wearing funny make-up. I decided to keep being a dork, ride it out, continue being semi-normal, enroll at Ole Miss, and drink my way through a business degree. But I get it: attention-starved people will often go great lengths to be noticed, be it in a positive or negative light. It's best just to ignore them; shooting close-ups of them on national TV is a terrible idea.

So once this Brandon Carter lunatic gets some face time, and Tech continues to post dominant victories over mediocre Big XII teams, a couple of indulgent, homo-erotic fluff pieces come out, painting the entire Tech offensive line as some quirky, diverse hodge-podge of individuals who in no way suck at life, are starved for attention, or are beneficiaries of a quick-release offensive scheme and terrible defensive opponents. Meanwhile, Ole Miss, at 3-4 on the season, having officially missed the media love train, has decided to quietly start stomping mudholes in asses.

So after a month or three of this tom-foolery, the stage is set: the #7 Red Raiders must stoop to playing the newly-ranked Rebels in the Cotton Bowl. Rebel fans (and recent Ole Miss opponents) are confident, but the entire rest of the nation is convinced that this game is a beatdown in the making. Tech supporters, citing that our defensive line is our biggest strength, are quick to point out that their mutant version of the Insane Clown Posse, with their cute nicknames and CBS sportswire features, are going to totally dominate Jerry, Hardy and co., leaving Harrell and Crabtree free to play a leisurely game of pitch and catch while the Ole Miss secondary stumbles around helplessly, yakety sax playing mockingly in the background (PS-check this out, and this. You're welcome.).

Long story short: we have this guy (why haven't I seen this article before today? It's amazing), and as we all know: 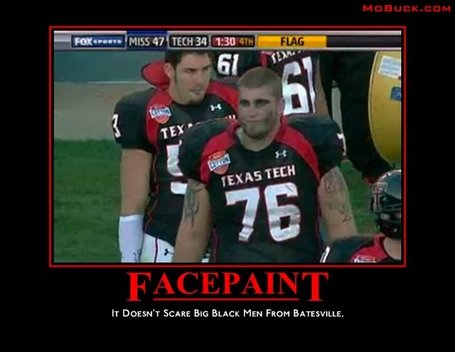 I'll admit, the Tech offensive line did a good job against our defensive line. It just wasn't good enough. Sure, we didn't sack Harrell 8 times and force a ton of errant back foot throws. But Harrell, quite frankly, isn't used to being touched, and he was fairly well-acquainted with the Cotton Bowl grass by the end of that fair January afternoon. Growing more and more irritable about their inability to keep their QB clean, Brandon Carter and Stephen Hamby both lost it, ripping their helmets off, pushing around 190 pound Ole Miss players, and generally smearing their mascara in a manner not at all appropriate for aspiring professional wrestlers/fry cooks/Lubbock real estate agents.

And there is was: the #7 greatest moment from the 2008 Ole Miss football season. Media darlings exposed as pass-happy frauds. TTU fans and players exposed as the sorest losers in all of college football. The Rebels revealed as potential contenders in 2009 and beyond. Stay tuned for day #6, all the way up day #1, and the opener, when JUCO and I will help invade Memphis and ring in the new season. Happy Weekend, and Hotty Toddy.