Share All sharing options for: The Cup Countdown: Number 9

In the ten days leading up to the beginning of the season, the Cup will be recapping the top ten moments from last season.  Not events, games, or players; but moments.  Just a few fantastic seconds which will forever be a part of our collective fan memory.  Today, BrianWalker'sElbow brings the faithful readers moment number nine.

During the fall of 2008, Rebel football experienced an unforseen revival.  I, BWE, missed the entire regular season of this revival because I was living out of the country for four months.  However, I did have the opportunity to make the trip to the Cotton Bowl where I witnessed the climax (cry-max for Texas Tech fans) of the comeback season.  [ed: you're still tragically unfunny] 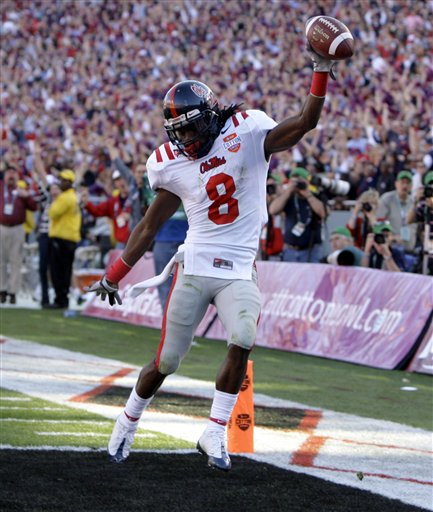 I thought "the curse" about which we Rebels had theorized was legitimate as the Cotton Bowl began with an embarrassing 14-0 Texas Tech lead.  I worried.  I began to bother myself.  I even blamed myself, figuring that it would have been much better had I stayed in South America and not brought my curse back with me.  To make it worse, I had tickets on the Texas Tech side of the stadium.  Oh what a day it was turning out to be.  Silly hand signs, cries of Big XII "dominance," and drunk Texans were making my life miserable.

However, the Rebels showed resilience and fought back to go ahead 24-21 at halftime.  Could it really be?   Could we do it?  After seeing the Rebs fight the way they did in that excellent 2nd quarter, this fan became a reserved believer.

Halftime came and went (ed: whooooooooooo Kilgore Rangerettes!) and The Red Raiders got the ball at the beginning of the third quarter.  Up to this point, Harrell hadn't had a great game and had already thrown one pick--an underthrown wobbler which fell into the hands of Cassius Vaughn--after throwing only seven during the entire regular season.  On this drive, he began 4 of 4 and had the Red Raiders poised to move down the field quickly.  Harrell was beginning to look like the Heisman candidate he was hyped to be.  Texas Tech looked ready to score.

They weren't going to.

On 1st and 10 in Rebel territory, Harrell lost focus and threw the ball under a diving Crabtree.  On the next play, he received a lot of pressure and again tried to throw to the reliable Crabtree.  There's only one problem.  Crabtree had fallen down!  (IMO, it was uncatchable for him anyway--terrible throw).

Marshay Green, who had played like a champion thus far, plucked the ball out of the air and darted towards the opponent's endzone.  He proceeded to juke a lame, white Tech receiver (see: not Wes Welker) and then followed Allen Walker, Ted Laurent, and Chris Bowers 65 yards to the endzone.

Just like that, the Rebels had a ten point lead and even more confidence.  Harrell threw 2 ints in 34 attempts (up to that point) in the Cotton Bowl after only throwing 7 in 568 attempts all season.  The third quarter would continue to go the Rebels' way, as Tech was held scoreless while Ole Miss tacked on another ten points.

As any Ole Miss fan does, I searched the field for yellow flags and waited on the instant replay.  It is my rule not to cheer until after the PAT and kickoff is over.  Then, they were.  They were over.  Wow, that really happened.  I REJOICED!

This moment--my favorite of the last season--is really a tribute to Marshay Green, a converted receiver who struggled for the first half of the year and finally came into his own.  A player who began the day by falling down and letting Tech score the first touchdown of the game before taking advantage of one of the best receivers in the game's slippage to score his own touchdown.  Marshay Green is tough and never backs down.  He lined up against Julio Jones, Brandon LaFell, and Michael Crabtree last season, getting better and better with each opponent.  In my mind, Marshay Green is the definition of a team player: a guy who will do whatever it is that is asked of him--regardless of how difficult the task at hand may be--so long as it helps the team win.

Oh yeah, Crabtree's stat line from that day:  4 catches for 30 yds and 1 TD.  He was absolutely owned by Marshay.  I doubt such a performance would make any receiver "Green" with envy. [ed: still unfunny]