Sources could not be specific as to the nature of the injury, citing a "cut or broken thingy" in his "foot slash shoulder region," but were certain as to is severity.

"Its (sic) def(initely) bad for Javon (sic) and the pissers GO DAWGZ(sic)," reported an anonymous source via text message.   When asked for additional details specifically regarding the cause of the reported injury, sources added that Snead was likely the victim of an attack at a local Mexican restaurant carried out by... 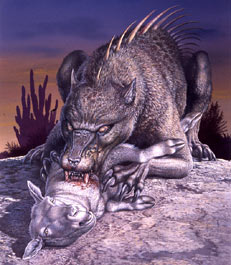 Meaning "The Quarterback Killah (sic)" in Arkansan, El Chupacabra is a beast widely believed to be a pivotal piece of modern Mexican folklore.  Rumored to attack livestock--especially goats--El Chupacabra has never been reported to have attacked humans.

That, however, has not stopped the incessant reports of Snead's injury.  Starkville native and sportswriter Steve "Rosebowl" Robertson claims to have seen the entire incident unfold.  "Oh yeah, it was crazy.  The dog-monster thing just jumped on him and started scratchin' and a-clawin' all over Snead until he had certainly--please dear Jesus--broken the guy's back or something."

Upon being questioned as to his injury, Snead quickly replied that he was not "gonna answer to that bullshit" before very kindly requesting that "(people) stop fuckin' followin' me around on Facebook 'n' shit too.  Fuck."  Teammates of Snead were also tight-lipped about the situation.

"I am the only one who brings misery to pretty-boy media sluts around here," replied Rebel defensive end Greg "gr3gxxz" Hardy.

"Mayne you retarded," added Rebel halfback Brandon Bolden.  "Snead ain't been to no choopa-koopa that I know of, this is stupid."

The conflicting accounts of this injury have led many to believe that the story could be wrongly attributed or, quite simply, a fabrication.  "HA dumb legHUMPERS// Dan MulletHEAD wishful thinking // 45 to NUTTin GREG BYRNE \\ BULLFRAUD jealous of SNEED HEISMAN," reported an anonymous source close to the situation.  "Tyson lee SCARED // HA makes story up \ scared of REBELS HOUSTON NUTT BULLFRAUDS!"