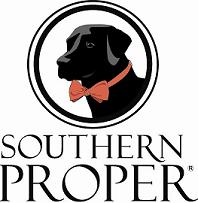 A few months ago, I contacted Reagan Hardy of Southern Proper with a request that they provide us with a great tie that I saw on their site for us to give away in some sort of a cross-promotional contest. I didn't know whether I would receive a response, but, much to my excitement, I did.

Now, not only do we have a fantastic tie to give away; we also have a great "Rebel Red" polo-style shirt. (Side Note: If you want that tie, this is one of the only ways to get them right now. They are temporarily out of stock.)

So, for you, Reagan, comes the first official Cup endorsement, ever: Southern Proper is a really fantastic brand that hails from down south in Atlanta, GA. Support them. Their stuff is excellent.  BUY NOW!

So, with prizes taken care of, we spent all summer trying to figure out what the contest would actually be about. We knew we wanted it to be some sort of fanpost or fanshot based event, but we weren't sure which direction to go with it. We had plenty of ideas.

"(Trite) Season Previews from the fans!"

"Capture a video Jerrell Powe on his scooter.  Bonus points for wheelies and flaming ramps!"

Eventually though, we decided those were too played out or narrow in scope.  The deliberation continued and eventually led us focus our contest on.....

Your assignment, should you choose to accept it, is to write a 500+ word fanpost that captures the essence of the Ole Miss described in the above statement. Ghost and I are thinking of something that is somewhat more sports-oriented (Ole Miss culture, etc), but I personally think that a well-done entry goes beyond that.  You can be serious.  You can be funny.  You can use photographs or YouTubes or whatever tools are at your disposal.  Just be creative.

Ghost, Whiskey Wednesday, Ivory Tower and I will read all the fanposts submitted for this contest. We will narrow the list to three, which will all be featured on the front page. The same day they are featured, there will be a reader poll asking which has most effectively captured what Ole Miss "is." The winner will receive his or her choice of the tie or the polo.

"But, wait, what happens to the other prize?"

Oh, I'm keeping it.  Don't worry.  It won't go to waste. We will use it in a contest later this year.

Anyway, the contest entries begin today and end on September 4th. The judging will occur that weekend, and we hope to have the poll up on Labor Day to begin the boring bye-week that is September 7th to September 14th.

So everyone, get to blogging.