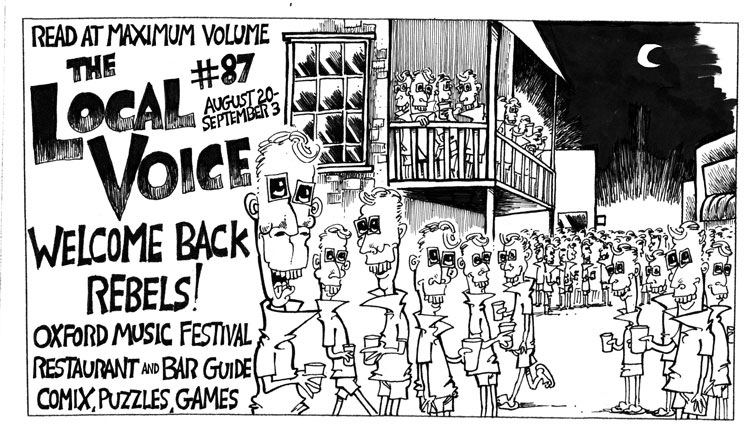 Seasoned Rebel fans, you won’t need to read this.  Nope, just go ahead and flip to something else.  I’m sure Godfrey is whining about something we’ve all collectively screwed up while the Oxford Music Snob has some more evidence that your taste in music is inferior.  Both will be more helpful than this column.

For with this column we bring you "Red Cup Rebellion’s introductory guide to Ole Miss fandom!"  There are plenty of new, young, innocent Rebels flocking to campus right now, and this piece is for them.

So go on, give this to someone who needs it or see whatever smartassed answer Jamo has to give for the weekly question.  Thank you.

Great, now we’re here with you, newbie.  First, welcome!  We Rebels are glad you’re here and boy is it ever an exciting time to be a Rebel!  We’ve got Sports Illustrated covers and ESPN deals and a football team with a realistic chance of—get this—winning games!  But, being as how you’re new here, there are some things of which you need to be made aware.  No, I’m not talking about the silly stuff you learn during orientation.  I’m talking about the things you would have had to pick up on via osmosis otherwise.  You’ll thank me, I swear.

For starters, know thy enemy.  You hate Mississippi State.  Your old high school buddies who you used to pal around the Sonic with before heading off to separate schools; the ones at State?  Yeah, you hate them too.  When we beat State at anything—football, basketball, whatever—you text them and remind them.  You are a snob and you are better than them.  Never think yourself above such behavior.

Also, you hate LSU.  You don’t even know why, save for the fact that grizzled veterans of the Ole Miss fan circuit have ingrained this fact into your psyche.  I don’t care if you’re from Louisiana or whatever; you’re at Ole Miss now.  When they arrogantly strut through the grove wearing pimp suits, purple wigs, or $14 windbreakers this November, you will curse at them.  You will mock their clothing and ridiculously long, oddly spelled last names.  You will throw frozen corndogs at them (stop asking questions and do it).

Next, the whole dressing up for games thing.  You know, people used to dress up for football games all the time.  Check out some of the stuff from the 1950’s on ESPN classic or YouTube.  You’ll see frumpy women in dresses and bitter-looking men in ties and hats.  Now, while that was high fashion not but fifty years ago, that is really nothing more than a novelty now.  Guys, if you are a freshman—and especially if you become a fraternity pledge—go ahead and don the typical plain khakis, white shirt, blazer, and red tie ensemble.  Oh, and don’t forget the, you know, sunglasses with rubber thingy holding them on your face.  However, if you’re a junior, senior, or even grad student and decide to dress like this then you’ve got bigger issues with which most folks would be unable to help you.  Yes, even your faithful cup correspondents gussied up in stereotypical Ole Miss fashion at one point, but don’t be surprised if you see this recent alumnus in a red polo and jeans this Fall.

Oh, um, yeah, the girls.  Keep doing whatever it is that you do.  Ole Miss has a reputation to keep and we can’t have you slacking.

As for your behavior during the game, remember that you are nowhere near as cool as you have convinced yourself to be.  For reasons unbeknownst to anyone, Ole Miss students have a horrible complex against showing up to the game on time, cheering, and displaying a general fanaticism towards a team which we all claim to love.  Seriously, just bite the bullet and wave your pom pom, scream at everything, and act a damn fool when Dexter McCluster jukes some Arkansas defender clean out of his socks.  Who cares what the people in your immediate vicinity think?  They won’t be as much a part of the action as you.  It’s their loss.

Of course, while in the stands, you should not ever scream obscenities or throw objects at your opponents.  Ever.  It is crass and uncouth.  Naturally there are exceptions to the rule.  These exceptions include, but are not limited to: Nick Saban, Les Miles, Doyle Jackson, Dan Mullen, Lane Kiffin, Alabama’s starting defense, Jordan Jefferson, Ed Orgeron, Alabama’s second string defense, LSU fans, the children of LSU fans, the yet unborn grandchildren of LSU fans, Bobby Petrino, and Langston Rogers.

And finally, read RedCupRebellion.com.  Go.  I mean it.  Right now.  You won’t regret it.  Visit and refresh every few minutes or so!  You never know when we’ll update and you’ll definitely want to be the first to comment.  (Oh shit, you're already here aren't you?  Well, it makes sense in print.)