You've Been Assimilated into the Borg, Spencer
While not necessarily Ole Miss related, I do want to give big ups to whoever at SBNation trapped, beat, and forced convinced Spencer Hall/Orson Swindle to be a part of our network.  I cannot believe that Juco and I were initially skeptical about making this move when we did.

Defense dominates Tuesday practice | Inside The Grove
Ty brings you his take on yesterday's practice at InsideTheGrove.  He does a good job of focusing on the success of a few defensive freshmen in particular.

Steelers' rookie receiver proving to be a fast learner | Post Gazette
LOLPUN!  Mike Wallace is fast.  We all know this.  The LSU, Mississippi State, and Texas Tech secondaries all know this.  Now, the Pittsburgh Steelers and their fans know this.  Click it to see a great article on one of Ole Miss' greatest receivers ever (not saying much, I know).

Iraq veteran Fein battling for spot on Ravens roster | Carroll County Times
Speaking of NFL rookie Rebels, Tony Fein is still scarier than Hell.  He's currently battling for a spot on the Baltimore Ravens' roster where he could play alongside Mike Oher and Jason Cook.

And, Just for Shiggles
Here's a picture of Nick Saban signing a baby.  Congratulations, Alabama. 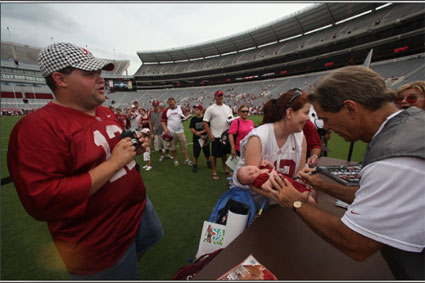 via The Sporting Blog