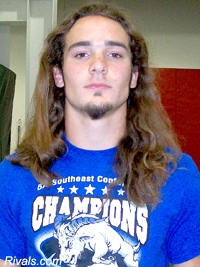 "He was just ready to commit; ready to have his recruitment over and done with," a source close to the program told our RCR recruiting correspondent.  "He's ready to get into SEC play."

When asked for comments on his newest player, UM safeties coach Kim Dameron said "we're thrilled for Brishen because we know he can make an impact as a part of our secondary."

Upon hearing the news, a telephone interview between RCR and Brishen Matthews was (not at all) arranged.  Excerpts from said interview follow:

Red Cup Rebellion: So in looking at your highlight tape, it seems like you love to attack the ball.  You're a real head hunter.

RCR: And you really seem to have some speed.  You were reported to have run a sub 4.5 at a few scouting combines and camps?  Do you know exactly what you ran?

RCR: That's incredible!  I've never even heard of such speed.

RCR: So talk about why you, as an Arkansan, decided to commit to the out-of-state Ole Miss Rebels.

BM: Man, you need to go up to Arkansas and see it man.  Just go up there man.  You'll see the Tyson chicken factories where they just pump innocent birds full of chemicals and such before they slaughter them so they can keep the materialist American population fed, fat, and happy.  You know, brah?  Oh and then there's Wal-Mart who, man, it just makes me like, all sad inside and shit, you know?

BM: Well brah it's just corporate greed and such man.  Like how they just lure people into their store before hawking their useless wares at them.  It's just so corporational and fat-catty and stuff, you know man?

BM: And plus dude, like in Oxford and stuff.  You know the environment and all of Bush's corporate greed and the war for oil it's just, man just so awful.  All the logging of the rainforets 'n' shit.  So yeah man Ole Miss is a cool place

RCR: One last thing.  I noticed your highlight tape had some music to it.  Did you put that together yourself?

BM: No way brah.  That music is just too, you know, aggressive 'n' shit.  I'm always lookin' for somethin', I dunno, a lil' crunchier than that you know.  I really like crunchy bass grooves and stuff brah.  Not angry, corporate, death music, you know?

BM: Yeah.  Tell them that I heard about the, you know, herbal garden they got on that campus ppffffhhhsssskkk *eruption into guffaws*  Yeah man.  And the girls are hot.

</jokes>
In all seriousness: totally excited about this guy.  He seems to fling his body around the field with reckless abandon which is something everybody needs on defense.  Hopefully he'll have a solid career as an Ole Miss Rebel.