Ravens officially sign Oher - The Baltimore Sun
The Ravens officially signed former Rebel tackle and first-round pick Michael Oher to a five-year contract, valued at up to $13.8 million, with $7.8 million guaranteed, according to a league source.  Oher, known for being the gi-fucking-gantic subject of Michael Lewis' The Blindside has already had a better year than any of us will ever have in our lives.  Ever.  Congratulations, Big Mike.  You've earned it.

Drew Pomeranz, Gerrit Cole and Christian Colon among top collegiate players for USA Baseball national team - ESPN
Here's a good read about Drew Pomeranz et al's domination as a part of Team USA baseball.  It's fun to remind ourselves that Pomeranz, Terrico White (U19 USA Basketball), and Evan Swindall (USA Youth Football) have all won gold as a part of some sort of national team this Summer.  Ole Miss loves America, dammit.

‘Wild ride’ may take Rebels’ Jevan Snead to the top | The Tuscaloosa News
A surprisingly positive Rebel football article, when considering the source, this article contains the following bit of tid:

I tried to make some things happen that I shouldn’t have, I forced some balls in there and made some bad plays. One of the things I think that really helped (was realizing), ‘Hey, you don’t have to make a play every time. Sometimes the defense wins. There are some good players over there.’

That's 100% Kent Austin talk right there.  I honestly can't imagine what Snead would look like at Ole Miss without him.

Spooky Rebels in Auburn: Trick, or Treat? - Track Em Tigers
Acid Reign, one of SB Nation's Auburn bloggers, previews the 2009 Ole Miss at Auburn football game.  While the preview is pretty well written and thought trough (despite some misspellings of Rebel names), I must respectfully disagree with Acid Reign.  We're gonna cross that bridge when we get there (Cup style lawya) but I wouldn't wager on the Plainsmen hanging 30-something on the Rebs.  Also, for entertainment, read the comments thread.  Colonel Reb's Last Breath showed up early and often in what would become a real e-pissing contest.

SEC 2009 // The New Future of Ole Miss - Team Speed Kills
11-1 but 2nd in the West to a 12-0 Bama.  That's what CockNFire of Team Speed Kills is predicting.  While going 11-1 only to miss out on Atlanta would likely suck beyond comprehension, the frustration would be immediately replaced with "holy shit 11 wins?"  I'm glad you like our chances, CockNFire.

Because you really can't ever beat a dead horse enough - Rebelations
The Dead Guy shares his thoughts on the apparent desire the entire state of Mississippi has to see Ole Miss play USM.  As per usual, he's dead on in his assessment that not nearly as many people give two shits about a possible Rebels vs. Golden Eagles match-up as the writer of whatever newspaper article he links suggests.  He's also dead on with his assertion that such a game would be a lose-lose situation for the Rebels.  Nonetheless, people just keep persisting.  He's also got a link in there somewhere to a football blogger in Seattle who, being completely oblivious to the damned sport about which he blogs, announces his astonishment in learning that Jevan Snead is in fact white.  Nice work, Seattlite, keep wavin' your fingers at us backwards-ass Southerners while announcing your prejudices in a fucking newspaper.

Houston Nutt is, well ... on the edge of crazy. We don't particularly have a grudge, but he's coached at two different SEC schools, and, well, kind of orazy.

So, hey, somebody must hate him.

You don't know the narrow-minded, unyielding, batshit wacky ass half of it.  Good for you, Bulldog.  The fact that you've completely avoided the maelstrom that is the Arkansas Razorback fan base has likely added upwards of 10 years to your life expectancy.

Oh, and this is cool
Seriously, how much ESPN.com face time are we gonna get? 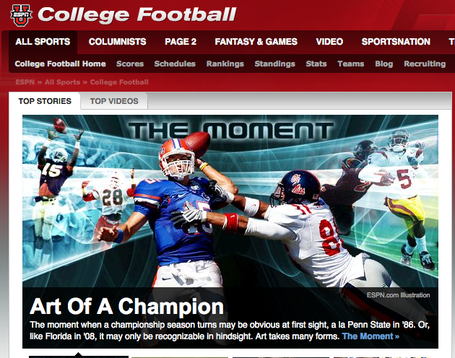