Stack-Ups: You Know What I Like About {Blank} Edition 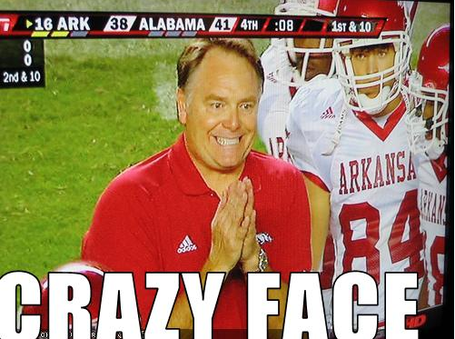 We all know what makes him happy.

In a league that is, generally, proud of its defenses, I submit to  you that there is only one position about which every team in the SEC West is, at least, satisfied - and that position is running backs.  Moreover, I think it is no stretch to say that every team in the SEC West ought to be excited about its running backs (a position which has held remarkably true in recent history).  Every team except the Rebels return at least one player who has recorded 800 or more yards in a previous season.  Arkansas and LSU return 1,000 yard rushers.  And of 2008's Top 10 backs in the SEC, all five returning are from the SEC's Western Division.  The division is a Brandon Bolden breakout season away from potentially having a 1,000 yard back at every school.  To-wit:

Running behind a depleted, but still talented offensive line will be, likely, Mark Ingram with a more than sufficient back-up in Terry Grant.  Ingram complemented Glen Coffee's thousand-yard effort with 728 yards, 12 touchdowns, and 5.1 per carry.  Julio Jones is the sophomore about which all Tiders rave, however, a solid season by Ingram is that thing which will draw defenses away from Jones.

Michael Smith returns with more yards per game than any other back in the conference at 107.2 (which is only a hair behind the overall 2008 leader, Knowshon Moreno, at 107.8).  In 2008, The Cup predicted Arkansas to trail its Western brethren in rushing prowess.  Technically, this was a fairly accurate assesment, since the rest of the team only average 6.3 rushing yards per game.  With the offense figuring to focus on Ryan Mallett's arm, Smith, who tore a hamstring against Mississippi State but was recently declared "one hundred percent," might take a step back this season.  Even if he doesn't, the 'Hogs will need true freshman Knile Davis to be his complement, and this writer is not in the business of relying on true freshmen.

Someone can likely find where this writer predicted high times for Auburn when its backs had the ball in 2008.  That never, so much, panned out.  Blame Tony Franklin, it's what everyone else is doing.  Between Brad Lester, Mario Fannin, and Ben Tate, it seemed that Auburn would find a go-to guy, but they never did.  Now, Fannin and Tate are back (now coached by The Great Malzahn) with a feel that is not quite McCluster/Davis or McFadden/Jones, but certainly some talent and the odds-on-favorite to be the centerpiece of the War Eagle offense.  If nothing else, Ben Tate ought to be able to handle a lot of carries en route to a yeoman's millenial mark, while Fannin provides some occasional spark.

Charles Scott stormed the SEC in the first half of 2008, but cooled off down the stretch, leaving many some apparently nobody wondering if he will again rush for 1,000 yards.  This team also still has notable Orgeron almost Keiland Williams on the bench, either of whom will be running behind Ciron Black, the First Team All-SEC Left Tackle.  But Scott earned 10, 28, and 65 yards in his last three games.  Makes me wonder if somebody else will be taking the carries for the haberdasher in '09.

I have great scorn for Anthony Dixon.  It all started in 2007 when Dixon, after a decent game in a win over Ole Miss, was invited to the Conerly Trophy presentation along with Titus Brown, who ought to have won, and Southern Miss doofus Damien Fletcher, who did actually win.  Thus, Benjarvus Green-Ellis was deprived of a meaningless honor (that last season went to a quarterback from Millsaps over two first-round draft picks) his senior season, and I was bitter.  Still am.  Also, Anthony Dixon is ugly.  He will, though, I expect, rush for over 1,000, lending credence to the oft-repeated misconception that offense exists in Starkville.

Between Cordera Eason, Enrique Davis, Brandon Bolden, and Dexter McCluster, many of us are excited.  We return every bit of the second-ranked rushing attack in 2008.  Our offensive line will take a step back, but there is more than enough reason to remain undaunted in your Rebel rushing enthusiasm.

On a conclusory note ...

The SEC West is as stacked in the backfield as it has ever been, even though there is no Cadillac or D-Mac in the group.  Making this, perhaps, the most difficult stack-up to guage.  Nevertheless, what follows is a best-guess sort: