Share All sharing options for: TLV #85 - For Ole Miss, It's Now Or Never

Before you jump on it or click the graphic, I invite you to check out the Local Q&A for this week.  The Q was "What is your guilty pleasure?"  Three of the A's come from Rebel football players.  George Helow somehow likes two-a-days, Ried Neely is--along with your humble correspondent--a big fan of the Pizza Hut Buffet, and Jerrell Powe admits that he sneaks his way into the Beacon whenever Don Decker's minions aren't looking.  I picture the latter of those three happening something like this:

Peggy Sue: What'll it be?

Powe: PUTSOMEMARSHMALLOWSINMYGRITS!!  AND SOME SWEET TEA!! 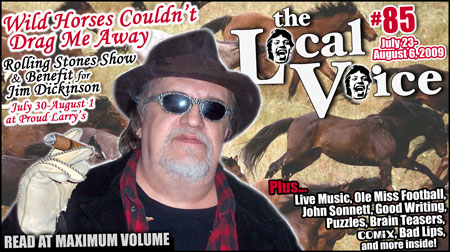 OXFORD, MISS (TLV) – Don’t panic. Don’t freak out, don’t jump up and down, don’t spontaneously start a Hotty Toddy wherever you may be reading this. What I am about to say will startle some and excite most, but be wary, as this is not my intent.

The upcoming football season will be the single most significant season in Oxford, Mississippi, in at least 38 years.
Yes. I am suggesting that what we are all about to witness is more significant than anything Eli Manning, Deuce McAllister, or Billy Brewer ever did as Rebels. Oh, sure, what they did was great; but the weight borne by them could hardly hold a candle to what is at stake this fall. Our program is at stake here. I kid not when I imply that the viability and sustainability of a successful Ole Miss Rebel football program will either be made or broken by what happens on the gridirons of the Southeast over the next several months.

We will either see the fortunate convergence of many great things, or a perfect storm cursing us to forever remind ourselves that "we are" indeed, "Ole Miss."

But, why all the drama? The sensationalism? The spooky talk?

Look at it this way. If it doesn’t happen now, it won’t happen again for a very, very long time. "It" is, of course, a season ending somewhere between a Sugar Bowl berth and a BCS title (the outcomes of which are arranged from most-to-least probable). Now is our time to shine and we know this to be more than just possible.

This team is very, very talented. Many NFL scouts are saying that the Rebels are only behind Florida as far as legitimate, draftable talent is concerned. This means that these Rebels can win, but not forever. Soon enough, we’ll have a field of primarily freshmen and sophomores. No Sneads, no McClusters, no Hardys. Just a bunch of Tommy McWhoisthisguys and Frank O’Kidwhoisstillinhighschoolrightnows. In order to ensure that the next several incoming Rebel classes are actually worth the scholarships our coaches will be offering them, we must win this season.

This talent could not have come at a better time. This season will mark the easiest Rebel football schedule many of us can recall. Florida and Georgia do not meet the Rebels in the regular season and our toughest divisional opponents, LSU and Alabama, are traveling to Oxford to play ball this year. Furthermore, our out-of-conference opponents include the ever-present Memphis Tigers, The University of Northeastern Southern Louisiana Technical State College, and two schools for the deaf and blind. This is something we cannot fail to take advantage of.

Not only all of that, but we have the media fawning over us the likes of which a vast majority of us have never seen. Sports Illustrated covers, ESPN features, reality television shows, and preseason rankings are doing nothing but legitimize our program in the eyes of potential new Rebels. The red and blue are being placed in the limelight in a way most of us would have never imagined 12 months ago. If we cannot take advantage of this 100% free, positive publicity to bring talent and money into our athletics programs, then we honestly do not deserve to leave the cellar of the Southeastern Conference.

Preseason rankings, national media coverage, NFL-bound talent all over the field, high-caliber coaching, an embarrassingly easy schedule, and a new found life amongst our generally lackluster fans have somehow all converged to the here and now. Barring epic disaster (and, let’s be honest, would that not surprise us?), this team could legitimately do things we previously only thought possible in video games. If our Rebel footballers accomplish what we know they are capable of, we will see incoming recruits, sports media figures, and legions of new Rebel fans pour into Oxford over the next few seasons. All of those things will do nothing but set up our future teams for continued successes. For the sustainability of Rebel football, this season is paramount.

Rebels, do not be afraid. Do not nervously lose sleep or chew your nails over this. Whatever happens, happens and is beyond the control of the average Rebel fan. Just know that if we are able to capitalize on the opportunity at hand, the Orgeron years will seem like a distant nightmare; one which never actually occurred.

We are… Ole Miss.