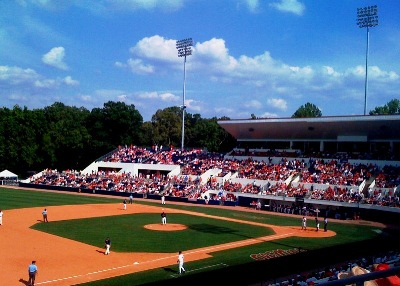 
Dim, from the second at-bat in the 1st inning, as power-hitting Logan Power takes the sign to....bunt. So that's how it's going to be. Sacrifice Ole Miss's all-time RBI leader to move Rebels' fastest baserunner from scoring position to "even better" scoring position? Power dutifully squares to bunt as a loud chorus of "Boos" rains down - rightly - on The Coach. Nevermind that the SEC's leading base-stealer could have taken 3rd on his own. Or that when Snyder pounded the ball into right, Henry could have strolled home from 2d. Nevermind that in exactly the same game situation the day before, Power lifted the ball over the left center fence on the first pitch. Power's bunt is perfect, 1 out. Snyder's sac fly is the 2d out. We didn't know it yet, but the Rebels were done. The Coach had just told his team that they couldn't hit Virginia's second-string pitchers, and the team believed him.

Then overcast, downright cloudy, in the top of the 4th when, with Henson at 2d and 1st open, Miller executes a not-so-perfect bunt ...what, again???....straight to the pitcher, who easily tosses out Henson at 3d. Henson's a gamer but he's never been called "fast." Why is Reinstettle windmilling Henson to 3d in the face of such obvious danger? We've just traded a man on 2d [courtesy of a lead off single followed by a throwing error by the Cavs' pitcher] with no outs for a man on 1st with 1 out. The plainly rattled UVA pitcher settles down, retires the next two. Go figure.

Baker is still on the mound in the bottom of the 4th and those of us in Section N who can't remember the last time he pitched effectively past the 4th inning are nervous. Storm clouds are brewing. Baker strikes out the lead-off batter on 4 pitches. Then gives up a hard-hit single, followed immediately by the first of what will prove to be six stolen bases. Baker walks the 3rd batter. A long sac fly ties the game. Forgive us if we're already calculating the drive time home by the end of the inning.

Thunder in the 5th - the crack of Virginia bats, to be more precise. The first 3 batters reach on back-to-back singles and Mort's error. Throw in two more stolen bases. No one is even warming up in the pen, despite the obvious signs [for those in the visitor's [us] dugout who missed them in the 4th] that Baker is done. Bianco sticks with his man and three more runs cross the plate.

The sun shines on Virginia in the 6th and we are hot, sweltering, in Section N. We like the sno-cones at OU Stadium - even if there aren't enough flavors - but they are impossible to manage while keeping a scorecard. Something is going to have to give. We look longingly at all those coolers in the left field terrace; we think of our own cooler back at the car. I consider the concession stand, remember that I sat resolutely in my seat for 11.5 innings on Friday before finally yielding to temptation, only to turn my back to the field to ask for a cold drink seconds before Smith ended the game with [what I was told was] a beautiful walk-off homer.

Even so, we perk up with Snyder's lead off walk. My teenaged son uncurls from the fetal position he'd somehow assumed in his chairback during UVA's 5th. Hope springs eternal! To be erased on the very next pitch when Smith lines a rocket straight to first, doubling up Snyder, who had taken only the most modest of leads. Snyder tries valiantly to reclaim the bag but there is just no help for it. U3 DP. If there had been any air left in Ole Miss's balloon the twin killing released it., irretrievably. No one to blame, just the way the ball bounces or, in this case, didn't. Michael resumes fetal position.

There was more, much more [or was it less?], but it hurts too much to record. And you were either there or saw it on the tube, and have read it all anyway. Suffice to say that those of us who remained to the bitter [and it was bitter] end, obliged the post-game request of our beloved PA announcer to give the newly-crowned "NCAA Oxford Super-regional Champions" a warm hand of applause. We are nothing at Swayze Field if not good losers.

Back in the car, a revived Michael is asking about next year's season tickets.