The Ole Miss Rebels: The Buffalo Bills of NCAA Baseball

Share All sharing options for: The Ole Miss Rebels: The Buffalo Bills of NCAA Baseball 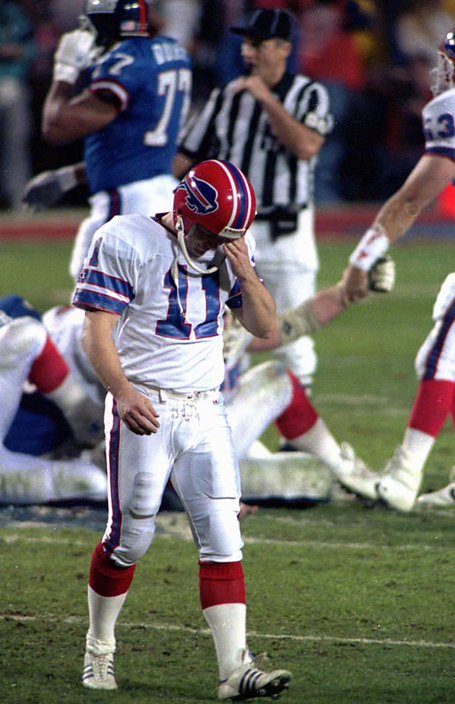 Evan Button, is that you?

I'm just going to throw all of this out there.  You throw back whatever you'd like.  Cool?  Alright.

Call me a homer.  Call me an apologist.  Call me what you will, but all of you know that I want only the best for our Rebels.

As of yesterday afternoon, several are beginning to think that current skipper Mike Bianco may not be what this team needs to advance past the sweet-sixteen of college baseball, the NCAA Super Regionals.  I disagree.  I do think that coach Bianco is what is best for our Rebels.  Let's first look at the most telling of all statistics, wins vs. losses.  Below you'll find our programs winning percentages the nine years preceding Bianco versus the nine years of Bianco.  You're smart enough to figure out that the blue vertical line denotes pre- vs. post-Bianco's hiring, aren't you? 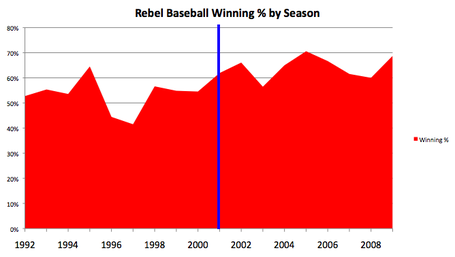 In the nine years preceding Bianco's nine years in Oxford, only one season cracked a plus-.600 win percentage and even had that season been during Bianco's tenure it would have barely been his fourth or fifth best.  Mike Bianco has made this program what it is and I feel there is absolutely no doubt about that in an overwhelming majority of our minds.

But why, after making it to four Super Regionals in five seasons, have we been unable to make our way to the College World Series?

This may be a hard pill to swallow for many, but I posit that our Rebel baseball teams, save for the incredibly talented victims of poor NCAA seeding we fielded in 2005, are simply not as good as we have led ourselves to believe that they are.

Let's take a look back at our Super Regional appearances.  In 2005, the Rebels, the 5th overall seed in the tournament, were paired with the Texas Longhorns.  Some would have called that matchup a push but, with guys like Houston Street and Taylor Teagarden, the 2005 Longhorns squad has the slight edge.  We all know the rest of the story; the Rebels took game one only to lose the final two.  As for the Longhorns, they swept the College World Series in one of the most dominant postseason collegiate baseball performances in the last decade.  No matter which way you slice it, that was poor seeding on the NCAA selection committee's part.  But, please, don't take my word for it.  Instead, take Texas Longhorn head coach Augie Garrido's opinion that our 2005 Rebels were the best team ever seen not make it to Omaha.

In 2006, we were paired with a two-seed Miami team.  We should not have lost that Super Regional.  Anyone who opines thusly is correct in doing so.  However, when considering the nature of baseball and playoff systems in general, somebody is going to take the brunt of an upset and, yes, sometimes that somebody will be us.  Suck it up.  Look at Florida losing to USM or UC Irvine completely blowing their regional for evidence of this.  To pretend that we're immune to such is ignorant, arrogant, or both.

The 2007 we traveled to Tempe, AZ to face the no. 5 overall seed Arizona State Sun Devils in their super regional.  The Sun Devils had lost ten fewer games than our Rebels.  Was anyone surprised at the outcome of that series?

This 2009 team?  This team was against a UVA team which won their conference tournament, gave Stephen Strasburg his only loss on the season, and took the regional away from the number one team in America.  How did we handle such excellent competition?  We played two hard-fought games decided by one run and another which wasn't opened up until a few innings were left in the series, all without Scott Bittle on the mound.  Yet, somehow Bianco is a "choker" who can't prepare his team to win the big one.

Sure, he hasn't won the big one, but we are constantly facing teams which are better baseball teams!  Aside from the Miami super regional, Bianco has lost to teams he should have lost to.  And, in baseball, you're going to drop a series to somewhat-inferior talent on occasion.  We just so happened to do that the one time out of four we were actually facing somewhat-inferior talent.

Let's look at this 2009 squad a little more closely.  How many all SEC players did we have this season?  The answer: 3 with one first-teamer and two second-teamers, one of which blew up his shoulder before postseason play.  Our leadoff man was 15th in the conference in batting average (but first in steals and a walk-machine, hence his all-SEC selection).  We had zero players in the top-twelve in batting average, slugging percentage, hits, RBI's, home runs, or total bases.  Yet despite this we were third in the conference in team batting average and on base percentage while being 3rd to last in strikeouts.

Our pitching staff was fine.  We had a good team ERA being just barely 2nd in the conference and sat pretty with the 3rd most batters struck out.  Nathan Baker, Drew Pomeranz, and Phillip Irwin were all in the conference's top-10 ERA list and Drew Pomeranz was third in batters struck out.  But, super regional opponent Virginia had an equally impressive pitching staff posting a very similar team ERA heading into this last weekend.

Frankly put, our team, despite having several weaknesses, was able to make it as far as they did because of Mike Bianco, not in spite of him.  Let's operate in a vacuum here with this hypothetical: if a team with nothing close a conference leader in major batting categories and an ace pitcher out with a shoulder injury somehow finished their season with a sweep over an (Omaha bound) opponent to earn a conference-leading 20-10 record just before winning their regional and coming so painfully close to knocking the hottest team in America on their way to Omaha in a super regional, how would you say they did it?

Nine times out of ten, you'd say "coaching."  Look up and down our roster.  This Rebel squad is nowhere close to the best one Bianco has fielded.  However, it posted the best conference record of any team he has coached and made a respectable postseason run.

Yet, somehow Bianco's (ab)use of pitchers, small-ball, and micro-managing isn't working?  C'mon Rebel fans, there's a bit of a disconnect there.

I will concede this, changes do need to be made.  Bianco is doing a great job of taking a bunch of middle-of-the-pack style players, sprinkling in a handful of All-SEC caliber guys, and racking up 17-20 conference wins.  But, just imagine what he could do with some amplified recruiting.

If one were to frankly assess the situation, they would see that we are not living up to our full recruiting potential.  While our 2011 class is rumored to be phenomenal (Juco knows more about this than I do), our last few have followed the Bianco mold of "get a few Gatorade POY types out of high school and surround them with JUCO transfers."  Or, at least this has been the modus operandi since the departure of Dan McDonnell to Louisville after the 2005 season.  What Bianco needs is another Dan McDonnell type.  A guy who can really improve his player's bats and recruit high-level talent.  When you really think about it, we have been a very incomplete team since that 2005 super regional ended.  A reliable defensive shortstop, solid middle reliever, and a truly consistent homerun threat have not all appeared on this team at the same time since then.  We have had some role players percolate about from season to season or even series to series, but one can't help but feel that the Ole Miss baseball program has been a "work in progress" over the last four seasons.  Ideally, improved recruiting will do what it can to "complete" this team in future seasons.

It is true that, due to our facilities and cleat-chasers, the program will, for the most part, recruit itself.  But, you've still got kids growing up in Mississippi, Louisiana, Arkansas, Tennessee, and other states in our area who can remember just about every one of our in-conference foes make it to Omaha while we haven't in their lifetimes.

Yes, as much as it stings, the LSU and Mississippi State mantra of Ole Miss At Home Again is very much the case right now.  Our recruiting will hurt a little bit until we get over that hump.  I cannot ignore this.

And, Brian Walker's Elbow, you need to relax.  For the last two seasons, you've been the Gonzohog of Ole Miss baseball.  You are so blinded by your anti-Bianco sentiments that you go so far as to refuse to acknowledge his successes.  I can remember being in the stands of Oxford-University Stadium when we took the second game against the then-number one ranked Georgia Bulldogs, all while you insisted upon the idea that Mike Bianco is overrated.  You're a buzzkill.  And you're not funny.  Give the man credit where it is due.  This team does not hold a candle to his best squad, yet it won an SEC co-championship when the other couldn't.  Yes, I was embarrassed by our two-and-through in Hoover as well, but I wasn't calling for Bianco's head just as I doubt Georgia fans were doing the same to Dave Perno last season (and they were the number one seed!).  Yes, I would have liked to have gone to Omaha this season, as with every season, but this team hardly has the talent to do it.

Bianco is a good skipper.  Of course, as with everyone, he is flawed.  I'm not going to pretend he isn't.  He utilizes a very bizarre mixture of conservative, "play-the-stats" style of baseball with high-risk-high-reward decisions (suicide squeezes, leaving pitchers in, etc).  He often confounds me with his decisions as well.  But, he has built this program into what it is today.  If he can swallow his pride and shore up his staff for some better recruiters and evaluators of talent, I fully believe we will truly realize Bianco's potential as a head ball coach.

We have the resources to make it to Omaha every other year.  Hopefully, yesterday will serve as the necessare wake-up call to push us in that direction.

Hotty Toddy and Go Rebels Go!  It's football season now, and karma is on our side.