Pomeranz selected for international bar crawl (or at least that's what they told him to convince him to try out).

Share All sharing options for: Pomeranz selected for international bar crawl (or at least that's what they told him to convince him to try out). 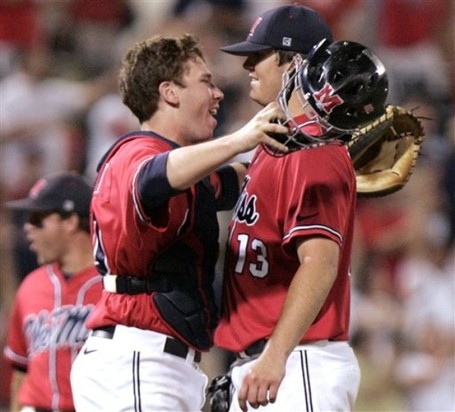 Brett Basham gives a celebratory hug to Drew Pomeranz.
Drew Pomeranz was named to Team USA at the end of the ten day trials.  I am glad that his arm still functions properly.  He was one of ten pitchers named to the team and one of four SEC players named to the team.  You can find the press release here.
This comes after a very successful Sophomore campaign that saw Pomeranz mow down 124 batters and finish with a 3.40 ERA.  The most memorable performance of the season came against Western Kentucky on June 1st.  He pitched a complete game  on two days rest.  He allowed only one run and struck out 16.
The Cup would like to give a toast to Drew Pomeranz on his selection.