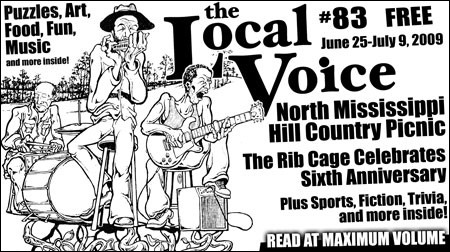 National analysts get Mississippi wrong. This is not to say that "they just don't understand our ways."  Neither is it a chest-beating repeat of the best-said version of that argument - "Hope Neil Young will remember a southern man don't need him around anyhow."  No, I am not arguing again that those who were not germinated in this the most humid of Petri dishes can have no concept of "our ways."  I have simply been reminded that national analysts just don't do their homework.

In the collegiate athletic purgatory that goes from the end of the college baseball season until the first football game, the only thing one can do is homework.  Studying up on statistics, trends, and history; arguing with friends and rivals.  ESPN has been attempting to facilitate this poor substitute for actual sport (I was on the debate team; arguing is not sport) through its "50 State Tour" on the daily afternoon program College Football Live.  I suppose I should be content that such a television program even exists in June.

Last Wednesday the discussion turned to Mississippi.  Online polls had asked the internet-savvy to vote on controversial classifications - greatest player, greatest team, greatest coach.  Surely, little controversy, though, would surround that last category.  There is, as we know, only one coach in the state's history with multiple SEC and mythical national championships - the revered John Vaught.

This was not the choice of ESPN analyst Shaun King.  Perhaps you remember Shaun King - the quarterback of an increasingly forgettable undefeated Tulane team in 1998, who went on to have an undistinguished NFL career mostly with the Tampa Bay Buccaneers.  King, graduate or at least attendee of a fine university like Tulane, ought to be familiar with homework.  However, the man made a strange choice for "greatest coach" - choosing he that won as many games (21) in his career as Johnny Vaught lost during his unbelievable run from 1952 to 1963, Sylvester Croom.

There is something inherently wrong with the unapologetic invasion of politics into sports.  A follower of both, I recognize the inherent advantages of preventing worlds from colliding.  I had this same reaction when Sports Illustrated listed Coach Croom in its commemorative "SEC:  75th Anniversary" edition alongside Steve Spurrier, Bear Bryant, Vince Dooley, and Frank Broyles.

Surely he was a little embarrassed, knowing that - regardless of the political and social significance of his hiring, which is, no doubt, great - his resume, viewed color-blinded-ly, was the one of these things that was not like the others.

On second though, maybe I am saying that "they just don't understand."  But, I don't mean those damned Yankees in Bristol, Connecticut.  It would be more precise to say that those damned sell-outs populating the press boxes these days just don't understand us -passionate sports fans - who will be just fine if you check your wad-tending panties at the door, thank you.

In summing up what he thought of ESPN's pandering, one of our readers, RedStickRebel said, "I'm glad to see that kissing the ass of PC America has become an acceptable substitute for good journalism."  Well said, sir.

After returning from a sports bloggers conference - these things apparently exist - one of our writers said, "[T]he mainstream's emotionless and unanalytical ‘team A beat team B by this many points' is slowly dying at the hands of what you see here: snarky, frank, and passionate discussion by and for fans."  In more ways than one, we, the internet underbelly of journalism, are providing a touch of reality that mainstream sports journalism is losing.