So THAT's how Georgia Got Him?

Share All sharing options for: So THAT's how Georgia Got Him?

Surely you remember Marlon Brown, Super Recruit? The wide receiver out of Memphis who, just this last signing day, spurned our Rebels and his homestate Volunteers last minute in favor of the Georgia Bulldogs? Yeah, now you remember. He was (somehow) the only player on our hotlist who was not signed by Nutt and staff come National Signing Day which is likely why many of us Rebels -- myself included -- are not too miffed about the whole situation. So, having that been said, I swear what follows isn't scorned Schadenfreude. Nope. Nuh-uh. Yessir, this is just for comedic relief, I promise. From LosersWithSocks, comes the following piece of insanely incriminating evidence which will likely end in (get ready, Razorbacks) a SECONDARY VIOLATION! 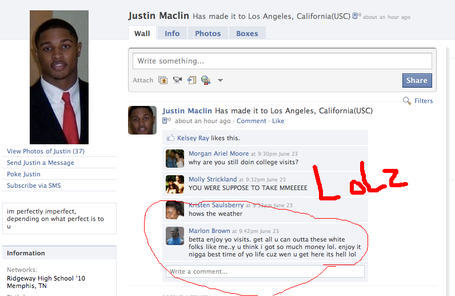 If "get all you can out outta these white folks" isn't the best advice a college freshman could give to a prospective student, then I was wasting my time as an Ole Miss Ambassador.

But Bulldogs, fear not! One of your very own has uncovered the truth behind this situation!

A "complete fake," you say? Alright, I buy it.  It's highly likely that Marlon Brown, being good enough at football to have amassed a small platoon of "haters," would fall victim to a plot geared around an imposter Facebook account which foolishly hints at whatever violations may have occurred during his recruitment. Dastardly done, haters!

Jokes aside, it's good to see that shit-crazy delusional morons exist in even the most respectable of fan bases.  And as far as I'm concerned, I'm not gonna blast UGA for this.  Recruiting is a dirty, dirty game.  Some folks just get caught are recklessly austed by dumbass freshmen.