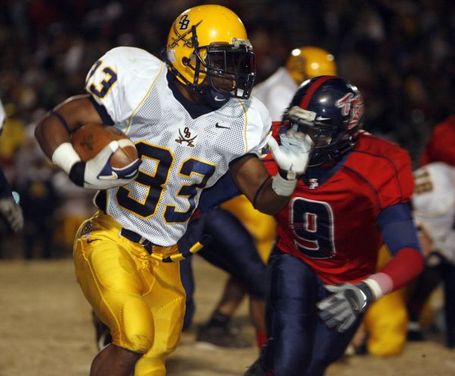 Photo via The Commercial Appeal (please don't sue us)

The chase: let me cut to it.  I, as I am sure most of you did, watched the recent edition of College Football Live which, as a part of their 50-state series, featured Mississippi.  My rundown of and thoughts on their coverage (or, at points, lack thereof) of the Magnolia State and all of her ballers are after the jump.

As soon as the show started, it seemed like it was going to be another "ESPN all of a sudden loves Ole Miss" style event.  They mentioned the 3 national "titles" and 6 SEC titles before showing clips of Chunkin' Charlie and the Mannings committing acts of general badassery.

Next came the Mississippi State intro which mentioned the fact that they are "a charter member" of the SEC and play in college football's 2nd oldest venue...  But, where were the mentions of championships?

Still a part of the intro segment, our boys from the HBC's got the love they deserve before footage of a young, crooked-teethed Brett Favre during his Southern Miss days was too-briefly flashed on the screen.  On that note, I am very glad that they gave Jackson State, Valley State, and Alcorn State the credit they deserve for producing some of football's greatest athletes.  More on that in a minute.

Archie Manning was featured pretty heavily.  They had him in on a telephone interview in which he spoke of the high level of talent and competition of high school football in MS being the reason for the state producing some of the sports all-time greats.  He began talking about the Egg Bowl and the significance of the rivalry.  I couldn't help but notice that, during that brief period, all of the the Egg Bowl clips were of Rebel victories.

Being a good Mississippian, Archie made mention of Walter Peyton, Jerry Rice, Steve McNair, and Brett Favre to demonstrate that Mississippi football exists outside of the scope of Ole Miss and the Mannings, something I fear which too few people outside of the South care to realize.  After running down a list of some of the greatest Mississippians to ever play football, Patrick Willis' name was dropped.  ESPN, we'd love to claim the guy, but he's form Tennessee.

After the Archie segment, ESPN's Shaun King, having such valuable perspective, opined on all sorts of Mississippian matters.  He started off strong by naming Walter Peyton as the greatest Mississippian to ever play ball and I can buy that.  His numbers are solid enough indicators on their own but it is important to note that the guy never gave up, ran hard, and was a family man.  Sweetness wasn't a wacky showboater or a whiner, just a competitor.  As OMTB would say, he grabbed-up his nuts and came to play every single time.

King then really bean to make an ass of himself. To list the 1999 Mississippi State bulldogs and their 10-2 record as the best team in state history is stupid. When you look throughout the history of the state, there are teams which won national titles, fielded Heisman Trophy candidates, and generally did better than the FUCKING PEACH BOWL. Even if you were going for "modern era" squads, most could name two Ole Miss teams over the past ten years which would have had more than a fighter's chance against the 1999 Bulldogs.

Oh, and if Wayne Madkin were a Rebel he'd be hovering right around 5th on our all-time list…  I know, I know, I said no cheap shots.  I lied.  Get over it.

Next the topic of "greatest game" came up.  I guess it's debatable as to whether or not Ole Miss defeating Florida last season is the state's most notable game. It's certainly the easy choice since it's fresh on everyone's mind, but there have been some great ones which deserve mention. It's very, very significant but Ivory Tower's recent polls have really spawned some great memories and comments which have basically revealed that it's impossible to crown one game as the single greatest in Mississippi history. There's Ole Miss' defeat of #1 Maryland in 1952, State's defeat of #1 Alabama in 1980 (see State, I'll give you some props here and there), "The Game," and many, many others.

Archie Manning was then named the best quarterback in Mississippi history.  Obviously, I loved that.  His numbers weren't sky-high but he was still a Heisman finalist.  Archie was simply a thrill and more often than not carried his team.  Brett Favre, Eli, and Steve McNair all have more impressive NFL accomplishments, but Archie put The Magnolia State on the map.  His time came when college football being aired on televisions nation-wide every single Saturday was becoming a new phenomenon.  Sure, people had heard and read about Johnny Vaught's championships; but people saw Archie.

Then came King's declaration of the state's best coach of all time. Here's where he got me…

The moron NEVER MENTIONED JOHN VAUGHT NOT ONCE ARE YOU SHITTIN' ME HE DIDN'T EVEN HINT AT HIS HAVING EXISTED!

Instead, the "significance" of Sly Croom caused him to be named Mississippi's greatest coach. What an absolute copout. And don't give me the whole "he was the first black coach at a major school in Mississippi" load of shit. Had he gotten a job in Alabama, would he even been considered for such distinction? No. The same goes for Florida, Georgia, Louisiana, South Carolina, and several other Southern states. Naming Croom was a lame cop-out. Yes, for being one of the first minority head coaches in college football he deserves some real credit, but this was a bit much, Shaun.

They then mentioned Marcus Dupree and closed with a brief take on Jevan Snead where they said he could make a run for the Heisman. Yeah, looks like he'll be having a visit to the orthopedist in a few months.

Overall, I feel they did a fine job. The lack of mention for John Vaught, Ray Guy, Bruiser Kinard, and many other great figures in Mississippi football irked me a good bit, but I guess there's only so much you can do in a 30 minute show. I did greatly appreciate them giving Walter Peyton, Jerry Rice, and Steve McNair high praises. Those three are some of Mississippi's the sport of football's absolute greatest. It kills me that Ole Miss missed out on them.

So here they are: my thoughts on College Football Live's Mississippi edition. Care to comment?