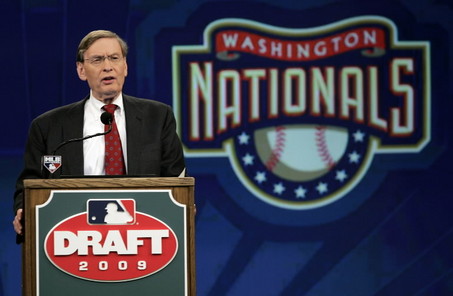 RCR breaks down the draft and chances of the chosen Rebels coming back after the jump.

You have to feel good for Bittle after the difficult season he endured. He started off slow, changed roles, still dominated and then we all know what happened.  I think the injury is not going to derail his aspirations of making it to the League.  Bittle’s solid, but with his throwing motion he cannot expect to be a starter in the professionals.  He puts far too much stress on his shoulder when he goes for an extended amount of time and I don’t think that will be an issue if he is kept in a set up or closer role.

Some friends of the cup thought I was crazy when I told them that Baker would be the highest player taken in the draft after Bittle.  He is a lefty whose fastball gets up there in the low 90s and he has a good variety of pitches after his fastball. It is not all about stats when it comes to the MLB draft, they’re looking at the velocities and type of pitches you throw.

Chances of coming back – 5%

Jordan has the potential to become a decent professional baseball player. A friend of mine told me he thought he could be a Willy Taveras type of player at the next level.  I agree.  The wooden bat should help Henry out in the minors.  Too many times he made solid contact with an aluminum bat and sent a line drive into the outfield, but because of the aluminum bat it would remain in the air just long enough for it to be a lineout. He won’t be getting as much power with the wooden bat and that could be to his advantage. On the other hand, his speed is not going to be nearly as impressive as it was in college.

Poor, Buk.  The Marlins… Still, Buk did a decent job filling in for Bittle and definitely had his moments while at Ole Miss.  I can see him turning into a decent reliever in the minor league level and maybe get the call up to the league at one point.  He doesn’t have the stuff to stick in the majors, but he’ll do better than some people may think.

This one hurts.  Ole Miss needed Irwin if it wanted to make a return trip to the Super Regionals and have a serious shot at Omaha next season.  Losing Irwin to the draft, which they will, seriously dampens these hopes.  Irwin’s not going to risk an injury or a down year in college to improve his draft stock.  He gone and the Rebels will need a freshman/juco to step up big time next season.

Please go pro.  Evan, I liked you while you were here and don’t blame you for that fateful Saturday.  Well, maybe I do a little. But, Evan, this is the chance of a lifetime. Arizona is a great place, great weather and beautiful women. You’ll sorely regret not taking advantage of this opportunity.  If you can’t tell I am very pro-Tim Ferguson at second base.

This is the third time AB has been drafted, but I don’t think it will be the last one.  I never gave up on Barrett and I think he will find his way back into the weekend rotation next season.  He has to have some skill to have been drafted three times before he completed his first year at a major baseball power.  Barrett loved Ole Miss and was instrumental in the team chemistry that helped fuel this team. Barrett comes back to prove that he is capable of being an SEC starter and to improve that draft stock even more.

I thought Henson was going to be picked up by an American league team. There is no denying his bat, but I am not sure how good he is as a catcher.  I guess they can coach him up at the position, but I was never impressed with his defensive abilities, he did manage the pitchers well though.

Matt Smith and his big ass chain will be back next season.  Smith is a solid baseball player but he strikes out a ton and he needs to prove that he can hit with consistent power.  I fully expect Smith to be back with the Rebels next year and for his power numbers to go back up to where they were his freshman season, and his strikeouts to continue to decline.

Not a great hitter, pretty damn slow, but good behind the plate.  I was always a Basham fan and glad to see he got drafted.  He also looks like Sherman from American Pie.