Share All sharing options for: TLV #82 - The Summertime Blues Begin 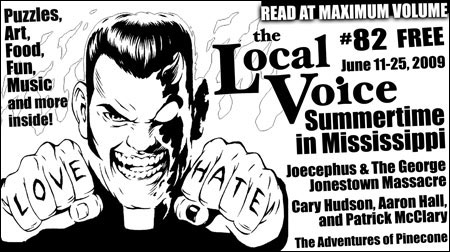 Not to pour any more salt on what are certainly still gaping wounds or anything, but we had the idea that this TLV by RCR piece would be on our Rebels’ first trip to Omaha, Nebraska’s College World Series since the early 1970’s.

So, in scrambling to muster up a worthy topic for this fine bi-weekly column, our collective brainpower could only focus on one thing: football season.

Sure, it may initially seem silly to look beyond the immediate horizon to something that begins three months from now, but riddle me this, Rebel: what in the hell else are we supposed to talk about? Summer school is in session, recent graduates are fruitlessly shuffling their resumes about, and we’ve got a date with the Memphis Tigers for which we’ve got to gussy up.

Over the next dozen weeks or so, the chatter around your condo’s poolside, over your hangover cure at Big Bad Breakfast, or during happy hour on the City Grocery’s balcony will likely, and should, be SEC football-centric.

"Did you hear that Jerrell Powe may not qualify?"

"I bumped into Houston Nutt at Phillips Grocery and, get this, he’s a fan of corn nuggets!"

"So Lane Kiffin committed another secondary violation? How many of those does it take to get lack of institutional control? Fifty? So, two more..."

The scuttlebutt throughout Oxford and Lafayette county will be as alive, optimistic, and anxious as it has ever been which will only serve to increase the appetite of any and every good football fan. Of course, it will get more difficult as the summer progresses but worry not, football fan, for there are moments—oases in an otherwise bleak and barren desert—which will temporarily satiate your hunger.

Right about now-ish, every chain book store, Chevron, and Wal Mart between Fayetteville and Columbia should have at least two magazine racks dedicated to the college football preview magazines. Athlon Sports, Lindy's, Phil Steele, The Sporting News, and others have put together hastily-researched and extremely glossy magazines for your perusal and subsequent disagreement. Normally, as a Rebel fan, one would not expect much out of these magazines, but this year is very, very different (SPOILER ALERT: Phil Steele has our Rebels as the 6th best team in America). Generally reserved for the overly scrutinizing sports fan who attacks their sports publications with highlighters and margin notes, this season should see a spike in magazine sales to Average Joe Rebel which, when considering the circumstances, is a very good sign.

In a month or so, you will purchase EA's NCAA Football 2010 for your XBox 360, Playstation3, or Atari 2600 and vicariously live out your failed football dreams through a pixellated Dexter McCluster. If you don't play video games, start. Geeze, this isn't the 1960's. Anyway, while this should be something you do every year, it will be especially important this Summer because the Rebels are undoubtedly one of the game's top ten teams. I bet that, upon your first startup of the game, you are normally saying to yourself, "gah, we're so much better than this IRL. I mean, Ethan Flatt totally has more THP than that!" Well, this year, that's not going to be the case as the Rebels will, for once, have great players across the board. Also, stop using the term IRL. What are you? A Halo addict?

Best of all, in only a little less than two months from now, you'll be able to read practice reports on the ACTUAL rebels playing in ACTUAL scrimmages. When August practice starts, make it out to any of the practices that are open to the public. It's a blast to watch our players practice, and you'll hear several funny sound bites at each practice. Dexter McCluster once threatened to "tear up" a defender "like lunch meat," whatever that means, and Jerrell Powe has been told to "put down the catfish" while running drills. You can't make this stuff up. While it's only practice, seeing oversized young men wearing plastic armor crash into eachother can induce a borderline euphoria in any football craving individual.

And finally, to get the Rebel sports hits your junkie ass needs, read Red Cup Rebellion at www.RedCupRebellion.com. What? Did you think we weren't going to pimp our own site. How long have you known us? We're money-grubbing whores. Read it. Do it now. VISIT THE DAMNED WEBSITE (ED: This part of the article really only works with the print edition of TLV)!

So if you, like us, are wondering what in the world you'll do all summer, just remember this: you only have to make it through June before opportunities to mindlessly waste time will be abundant. Sure, it will be a difficult trek, but we will make it together. Until next time, your friendly neighborhood Rebel bloggeurs bid you adieu (pronounced: If you get this joke, you need to graduate).