Well shucks, there Goes three more Wild Rebel candidates - A low APR score will cost our Rebels three scholarships for the coming recruiting class.  This is without a doubt a result of the staggering attrition suffered during the gale-force, difficult to understand winds of Hurricane Orgeron in that the NCAA strongly considers graduation rates of athletes when grading the academic performance of their member schools.  Thanks, Ed.  No, really, you're fan-fucking-tastic.

Speaking of fan-fucking-tastic - Nick Saban and Phil Fulmer will be joining Coach O on the cast of The Blind Side.  This is going to rule.  If you weren't already planning to see this movie (BAD REBEL ALERT) you now have no excuse not to.

This would be sweet (nudge nudge) - CFN picks the Rebs to represent the SEC in the 2010 Sugar Bowl in their way-too-early bowl projections.  Our projected opponent? 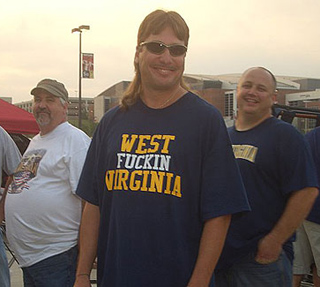 That's right!  WEST FUCKIN' VIRGINIA!  That could perhaps be the greatest Sugar Bowl in recent memory. Self-important tailgating vs. flaming couches; smuggled hooch vs. methamphetamines; poverty vs. poverty.  And all in the debauchery capital of North America, to boot!  Honestly though, I'd say the Sugar Bowl is a realistic destination for this year's Rebel squad if all of the pieces fall into place.

I like this kind of stuff - Over The Pylon has done some serious number crunching to determine the most statistically balanced college football teams of last season.  By combining and analyzing data from 17 statistical categories, they have put together an interesting top-25 which has our Rebels at #10.  The best team statistically was Penn State which shouldn't be too surprising when considering the nature of their two losses (a last second field goal kicked by Iowa and a very predictable beatdown at the hands of USC).  The worst team statistically was Washington which also isn't surprising because the 2008 Huskies may have been one of the worst teams in the history of college football.  Anyway, go check it out.