Bittler develops most diabolical plot of all time

Share All sharing options for: Bittler develops most diabolical plot of all time

As Brett Bukvich hurried to the bullpen on Sunday at Auburn, every heart in the Rebel Nation sank (even Brett Bukvich's).  You saw the pictures.  You know, the ones of Scott Bittle chugging Pepto Bismol in the dugout.  Was he really sick?  Was he confused to the point that he had eaten his Cinco de Mayo meal on Saturday?  Were his problems due to Margaritas and Mole Sauce?

The fans have been awaiting an official word on what went down last weekend.  The rumors are:  1) Upset stomach caused by food poisoning led to dehydration. 2) Sore bicep. 3)Shoulder problems that have reoccured since the Yankees' Draft incident.  After much investigation, I have uncovered the truth.... 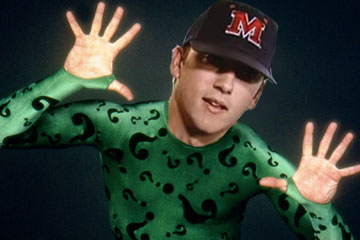 It was 1 p.m. in Auburn, Alabama.  The Bittler moved towards the bullpen to begin preparing for the game.  He had other ideas.  He could put together a fifth consecutive start that would make any pitcher envious. He thought, "But, against Auburn?  Who cares... I mean, even Brett Bukvich could beat them.  Wait.  Brett could beat them."

It was time to prove a point.  He had to do it.  He threw up in the bullpen.  It was a cover-up.  He wasn't sick.  He wasn't even sore.  He wanted to send a message to Auburn, the SEC, the World, the Yankees.  Scott is even more mysterious than his cutter.

Bianco noticed the commotion, so he moved down the line to investigate what was going on.  "Scott, what the heck? Throwing up? Were you out with Pomeranz last night?"

The Bittler answered, as he always did, in this way:  "What is it that's always coming but never arrives?"  Mike was clueless.  "Gosh, another riddle," he thought.  "I never get these.  Well, is this an Omaha joke?"

"No, Mike.  Tomorrow.  Tomorrow never arrives."  With that, Scott meandered from the bullpen to the dugout and sat in the corner.  Mike was stunned.  "Crap. I hope Buk can do it.  BUK!!! GET IN THE PEN!!!"

The dugout was silent.  Could the Rebels win on Sunday without Scott? They hadn't all year except for Vermont.  And that was VERMONT.

While Buk was warming in the pen, the players were assessing the damage.  "Scott, how do you feel?" Miller asked.  "Regretfully, not like a baller, Zack. You know how that feels, right?"

Bianco again returned to the dugout.  This mystery still had to be solved.  "Scott, what's your deal?  Sick of being a starter?  Wanna be a closer?  You've battled.  You've battled all year.  Even when you didn't have your best stuff, you battled. What's the deal?"

The Bittler replied, "How canst thou keep a rooster from crowing on Sabbath morn?"

Mike was sick of riddles.  He wanted answers!  "How, Scott? Is this some sort of secret message? I hate your freakin' riddles!"

Scott spit on the floor of the dugout and began to mix his saliva with the dirt.  After sitting pensively for what seemed like an eternity, he replied, "By killing him on a Saturday night."  Mike was completely confused.

"DANG'T, MIKE! Don't you get it?  This isn't about Sunday starts or sweeping Auburn.  You have to understand that this is more than that.  This team is good, even without me! We're tied with freaking LSU for the SEC title!  If you had left me in during that Sunday game against them, we would have won and virtually locked up a national seed and the SEC champtionship!  Why should I pitch at your whim now?  You call the pitches EVERY FREAKING TIME!  I'm not a slave to your control freak system.  I pitch when I want."

Never in the nine seasons that Bianco had been in Oxford had a player spoken to him in that manner.  It's Bianco's show.  He calls pitches, gives signals, and talks to pitchers on the mound.  "Scott, I'm losing patience with you. Get to the bullpen and get warm before Buk REALLY has to pitch!  We have to have this game if we want a national seed or have any shot at Omaha!"

This was exactly what Scott had wanted as he wanted to piss Bianco off.  He wanted Mike to think.  He knew the team had to have the sweep.  He knew that Mike wanted a national seed, that he wanted to go to Omaha.  "But, could Mike get us to Omaha?" he wondered to himself.  The Bittler was just as frustrated as anyone about the Omaha heartbreaks of years past.  Scott didn't want to hurt the team, but he had to prove a point to the coach.

"Mike, what do you throw away that keeps returning?"  Mike grinned as he picked up his clipboard.  He finally knew the answer!  "A boomerang, Scott. A boomerang comes back after you throw it."

"Wrong again, Mike.  Our hopes of going to Omaha."

In the back of Scott's mind he knew what he had done was wrong.  He knew that the ensuing doctors visits would prove that nothing was wrong with his shoulder, bicep, or stomach.  He just wanted Bianco to think.  Without saying another word, Scott sat down on the bench..."It's time, he thought.  It's time to go to Omaha." 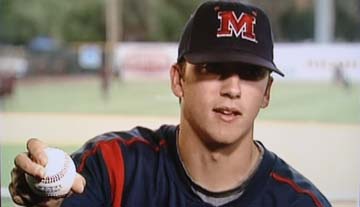 You can see the deception in his eyes as he shows his secret grip for "the thing."