The tournament champion of the nation's best baseball conference, the defending national champion, and the undisputed best pitcher in college baseball are California dreaming this weekend about potentially knocking off the #6 national seed UC-Irvine Anteaters. 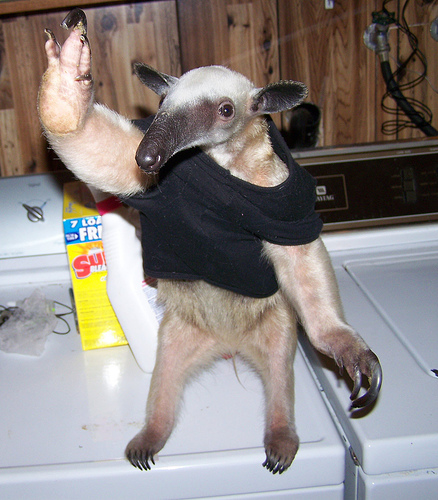 UC-Irvine has the most interesting regional this weekend, for sure, and with some solid programs and players challenging out West, the Rebels can't help but look forward a little bit.

The Anteaters themselves slashed through the Big West posting a 22-2 ledger in conference.  Of course, by deductive reasoning, we can learn that they must have dropped more than a few non-conference games, going 21-11 against only two non-conference tournament teams.  As a team, they are batting .318 and have won 8 of their last 10.  Overall, they have played 8 games against RPI Top 50 teams (all of which made the NCAA Tournament), winning 5 and losing 3.  They went 2-1 against Utah (RPI 95), another tourney team.  In other words, this is a solid team with a great deal about which to boast (not least among which is their very attractive and domesticated mascot).  Nevertheless, their story as a team does not seem invincible.

So, don't be surprised to hear to occasional "Wahoo Wah" bursting forth from the student section, because the ACC Tournament Champion Virginia Cavaliers have a chance to steal the weekend from Irvine and set up the potential Super Regional in Oxford.  UVA started the year 19-0, but tapered off to finish 20-12-1 after two straight disappointing weekend losses to Miami and North Carolina back in late March.  As a team, they batted their way to a .333 average and 53 home runs.  But it was all only good enough for a #6 seed in the ACC Tournament, which, as previously referenced, they won.  I reserve judgment on that tournament win, though.  Dish Network subscribers (read: those of us that had to watch the ACC Tournament Final instead of the SEC Tournament Final) saw that in the ninth, God, who rightfully hates the Florida State Seminoles, brought down a rainstorm during UVA's at bat that caused sloppy fielding and a couple of wild pitches by the 'Noles and a three-run rally by the Cavs, but dried things up for the Wahoos to get three strikeouts and the championship in the bottom of the ninth.  Nevertheless, 43 wins and strong post-season run give the Rebels reason to hope.

San Diego State's Stephen Strasburg is projected to be the #1 overall pick in the 2009 MLB draft.  His Aztecs, on the other hand, must feel a little like they are the Chess Club Captain who brought Miss America to the Senior Prom.  This is a team that hasn't made the NCAA Tournament since 1991.  To put that in perspective, the NCAA did not even use the Super Regional format at that time.  Strasburg, though, has an entourage.  The #2 guy, a junior right-hander, Tyler Lavigne, has a 7-2 record with a 3.32 ERA, and the closer, a sophomore right-hander, Addison Reed, has a 0.68 ERA and 19 saves.  This all explains why head coach Tony Gwynn (yes, that Tony Gwynn) has yet to reveal which pitcher he plans to start this afternoon against Virginia.  Makes you wonder if these guys suck that bad after all.

A four seed for the second straight year, the defending national champion the most mind-baffling obscure note in NCAA baseball history Fresno State Bulldogs were in danger of being the lone team left out of the six-team WAC tournament before sweeping a four-game series at Sacramento State to close the regular season. True to form, the Bulldogs then lost their first game to New Mexico State only to win four straight and the conference tournament, which as you, me, and Dennis Felton know, really puts the NCAA in a tight spot with regard to, you know, putting good teams in the tournament. Armed with the knowledge that anybody can get hot for about 10 games and make it to Omaha, the Bulldogs are looking for another miracle in Irvine, and they'll be relying on their fairy god-batters like Tom Mendonca (.345/.453/.739 with 27 home runs and 78 RBIs), Danny Muno (375/.526/.532 with 13 steals) and Alan Ahmady (.326/.453/.739 with eight homers and 53 RBIs). Baseball America says they'll have to rely on mojo to make another run.  With a 153 RPI and an 0-2 records against teams in the RPI Top 50, this closet Georgia fan will deeply appreciate Irvine, Virginia, and SD State's good decency in pasting Fresno to the wall.

BWE wants to go with San Diego State in a fantastic upset, but that may be entirely because he wants to see Strasburg pitch in Oxford.  Because they have two great starters and one great closer, the Aztecs have the kind of shot few three seeds have.  And with a 43-win team sitting there at the 2 seed, it is reasonable to hope for some kind of upset out in Irvine.  What the Aztecs do on Sunday, is what I wonder.  So, I'm calling the milder upset and a win for Virginia.  Wahoo Wah and Hotty Toddy!