Share All sharing options for: The Local Voice #81 - Regional Preview 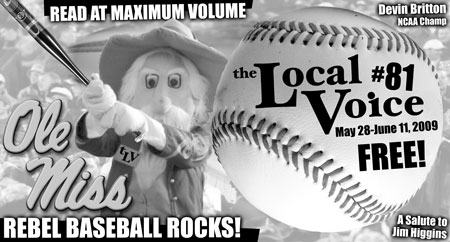 Rebel fans, this weekend marks the fifth year out of the last six which will see Oxford host an NCAA baseball regional tournament. The regionals, for those of you who are somehow unaware, are a four-team, double-elimination event which will determine who will make it to the super regionals, or the "sweet sixteen" of college baseball. From that point, the eight super regional winners will be given the eight spots in the College World Series held every June in Omaha, Nebraska.

Visiting Oxford for the 2009 regional will be the Missouri Tigers, the Western Kentucky Hilltoppers, and the Monmouth University Hawks. From Friday until Monday, Oxford-University Stadium at Swayze field will be filled to the brim with baseball fans to watch four of the top-64 teams in America fight their way into Omaha.

Hopefully, dear reader, this is not your first dog-and-pony show. We’re quite used to having folks from across America visit our neck of the woods for baseball but, just as a precautionary measure, we at the Cup would like to offer you our three tips for Rebel fan behavior during baseball postseason play.

First, share the love. The single greatest thing about the "best college baseball atmosphere in America" is the camaraderie among all in attendance. To folks in the grandstand, don’t hesitate to talk baseball with those around you. In direct contrast with Rebel football and basketball fans, Rebel baseball fans generally know what they’re talking about and I’ve had many a great conversation in the stands of Swayze. To the families and friends out in left field, bring enough food for everyone. It’s a wonderful thing that we are able to have a ballpark with a nice, terraced outfield complete with space for you and yours to freshly grill a various sundry of meats. Fortunately for you amateur chefs, not a soul in left field will have reservations with you firing up one of the many provided grills and doing whatever it is that you do. However, people will have major reservations if you do not bring enough for everybody. You all know that the guy who brings nothing more than a couple of hotdogs for himself and his buddy is a real jackass. Do not be that guy. And, to the students on the terraces above right field, don’t be stingy with the beer. We’re all trying to have a good time and, in the heat of a June afternoon in Mississippi, people are going to need a drink. Anyway, it’s not like you’re drinking anything nicer than thirty-cents-a-can Keystone. You can spare a few.

Second, don’t botch the cheers. It’s "throw it in the dirt." It’s not "throw her at the dirt," "throw ‘em on the dirt," or "bean the batter!" Chip Clinton didn’t spend years atop the stands at Swayze making that cheer the phenomenon it has become just so you can screw it up all willy-nilly like. Say it loudly and proudly. If you’re one to stand up and sing Neil Diamond’s "Sweet Caroline," don’t half-ass it. Show some pride and jiggle your arms in unison with whoever that guy is leading the song above the home dugout. And never forget that every call which does not benefit our Rebels, no matter how correct "blue" may be, is wrong. "C’mon BLUE" should ring from your mouth even if a wild pitch is called a ball. That guy is out to get us and you know it.

Finally, do not forget that Swayze is our ballpark. Yes, Mississippi is the Hospitality State and yes, we do take very kindly to visitors, but don’t be at all hesitant to remind our opponents where they are. Mock opposing coaches, heckle opposing pitchers, and wittily remind opposing fans just exactly where they are. I can remember the 2006 regional matchup against Tulane when, after an inconsequential Green Wave homerun, a "Hullabaloo" chant, the Tulane equivalent of Hotty Toddy which, somehow, makes less sense, broke out. The meager attempt to rally the Green Wave troops were suddenly interrupted by an overwhelming Hotty Toddy which rang from every corner of the stadium. In a way, we were saying "look, Tulane, we’re glad you’re here and all, but know your role." Carry your swagger appropriately.

That’s it. If you’ll mind those baseball P’s and Q’s, you’ll have contributed to the baseball atmosphere needed for our Rebels to succeed. As it stands right now, Bianco’s boys are "paired" with 6th overall national seed University of California-Irvine. This means that, if we were to win our regional, we would either spend the next weekend in Irvine, California or, once again, in Oxford if Irvine doesn’t survive their regional. If everything falls into place, we’ll see you back here next weekend.