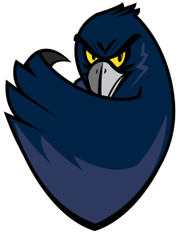 Know fear, Rebels. The Monmouth Hawk, still smarting after being denied his rightful spot as the villain in The Rescuers Down Under descends haughtily upon Oxford this weekend.  See him there, plotting.  Oh, you can't?  That's because he has cunningly concealed himself behind his dark wing.  Can he fly like that?  Heavens, no.  But he can plot.

Comes he to you from New Jersey with wins - 32 of them and an aweful Northeastern Conference Tournament victory.  Cower in his eerie yellow stare.  He has defeated your puny Navy and slain mighty Rutgers, Princeton, and New Jersey Institute of Technology.  He is, verifiably, the king of Garden State baseball.

Verily, oh ye who quaketh beneath the midnight of his wingspan, know that he beat Central Florida, who beat Rice, who beat Southern Mississippi, who beat Ole Miss.  Ipso facto, Darkwing Duck the Monmouth Hawk has already beaten the Ole Miss Rebel.  The fate of the Rebel is already written.  There is no hope, no relief from the ever-widening darkness.  It is finished.  The Hawk knows not of the Omaha of which you speak, but he shall be there too, even after he has dispensed with the Ole Miss Rebel.

It is finished.  He knows you fear too much to approach his nest.  That you no one courageous enough to stand before star pitcher Ryan Buch.  Or starting guido douche Second Baseman Chris Collazo, who foolishly allowed his facebook to be published publicly.