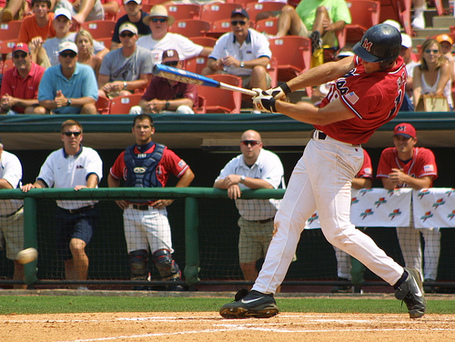 When many Rebel fans talk about baseball, they talk about the "2005 team" that was so talented and great. However, which team is better? The 2005 or 2009?

What do you compare when you look at the teams to determine which one was better? RPI? SOS? Batting average in SEC play?

Since four years have passed, many things have changed in the SEC from a personnel and coaching standpoint. However, we'll attempt to hold these things in a vacuum and just look at the numbers.

RPI, not losing to inferior opponents, and played a tougher schedule. It hit more homeruns in SEC play, and 20 of those came from Pettway and Head.

To be fair, our RPI and SOS will get better the longer we survive in the postseason though it is doubtful we'd make it all the way to #1. Our attendance has grown by more than 2,000 fans per game since 2005. That has nothing to do with what team is better, and I included it just as a fun fact.

It seems to me that the teams are just completely different. The 2005 team had all-stars like Head and Pettway and the 2009 team is, well, a team. We had an all-star in Scott Bittle but it is looking more and more like he is done.