Are We Rebels Delusional?

Share All sharing options for: Are We Rebels Delusional?

The simple answer is, of course, yes.

But, we're not nearly as bad as these guys or even these guys.

While the SEC is known for its ferverent, passionate fans crazies, we Rebels have cultivated our own special band of lunatic.  Just a quick stroll through the Grove or a skimming of the Ole Miss Scout and Rivals forums will allow one to hear the wildest of notions being entertained.

"[White recruit] from [private school] is going to be the next Brett Favre."

"My daughter is a fine upstanding student who doesn't drink, swear, or uncross her legs."

If you were to ask some of these fans about Ole Miss football, you would learn that we should be in the hunt for the SEC title every season, Mississippi State is jealous of every single thing Ole Miss has ever done, and that the Landsharks is a perfectly reasonable mascot for a football team in Mississippi anywhere.

But, in the wake of recent accusations of our lunacy, I feel I must defend our oftentimes over-the-top fanbase.

Right now, what are Rebel fans saying about the upcoming football season?  If one were to essentially "average" the expectations seen on message boards and overheard at happy hour on the Square, Rebel fans are looking to win the West.  Now, whether or not a victory in the Georgia Dome is remotely possible is wildly speculated, but the fact remains that besting LSU and Alabama for the divisional title would be the situation which transforms the 2009 season from "good" to "great."

We're also saying things about a top-10 caliber team, Jevan Snead's emergence as a top-flite quarterback, and a potential BCS bowl berth.  How is all of this being received accross these here intrawebs?

"Delusion, thy name is Ole Dork fan." -Arkansas fan by way of Hogville

"No offense to Ole Miss but the west looks like it'll come down to LSU and 'Bama again this season. Bryant-Denny will be rockin'! Should be a great game." - Alabama fan by way of the SEC Rant

"I am not bragging but I actually think we will have the title rapped(sic) up by T-Town Alabama will be lucky to keep this one close.." - LSU fan by way of the SEC Rant

"this is(sic) gotta be a joke! ole miss?wtf? omg ND! this guy has fukn(sic) lost it! not saying my team should be in there, but i counted about seven teams that should be in there! where the #### did the other 18 come from?" - Miami fan by way of ESPN.com

"Schlabaugh is out of his mind on Ole Miss and will look stupid when Vandy makes it 4 out of past 5 on October 3 in Nashville. I only hope that Ole Miss is still in the Top 10 by then!" - Vanderbilt fan by way of ESPN.com (no I'm not kidding)

So, for some reason or another, we shouldn't even be in the conversation with regards to our aforementioned ambitions.  Yes, to these fine people, we're being delusional.

Except we're not.  Here's the thing, SEC teams outside of Florida: our quarterback is better than yours, our defense is better than yours (push if you're Bama), our offensive playcalling is more diverse than yours, our backfield and defensive line are deeper than yours, our team plays harder than yours, we return every single major statistical leader for this upcoming season.  We're in nearly everybody's preseason top-10, projected by many to be BCS bowl bound, and have one of the best signal-callers in the nation  leading our high-powered offense. 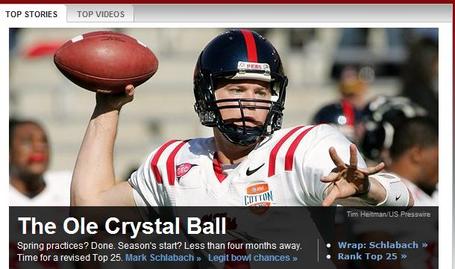 tell me again how exactly we're the ones being delusional by suggesting that this is a very good Rebel football team?

Face it, college football world.  If you don't think the Rebels are for real this time, you're the ones being delusional.

So, fear not Rebels.  Nine times out of ten, I guarantee that we are the ones being unreasonable, ignorant, and short-sighted.  Right now isn't one of those times.  We do have a good chance to win the West, enjoy a BCS bowl berth, and establish our quarterback as one of the nation's best.

However, Clayton Moore still isn't the next Brett Favre.  Sorry.