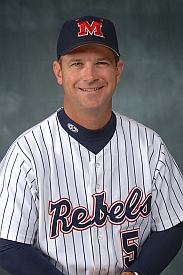 Bianco's boys did something that they'd never done during his tenure: win the SEC regular season title.  Well done boys... Where does that put us in the regional/national seed hunt?

The Rebels steamrolled Arkansas by a score of 16-3 in the regular season finale which racked up their 40th regular season win and 20th SEC victory of the season.  Most importantly, WE WON THE FREAKIN' SEC!  Honestly, I thought I'd never live to see it (and I'm in my twenties).

Think about all we accomplished today:

20 SEC victories (most ever in school history)

40 regular season wins (tied for most ever in school history)

These are big things... Bianco has won the West, Overall, and Tourney Titles.  There is only one thing lacking: Omaha.

The road to Omaha begins on Wednesday in Hoover, Alabama.  We will play at 1:30 against the Bulldogs of Georgia.  Georgia has been atrocious since leaving Oxford, but I don't know what to think of that.  Does this mean they will continue to be bad?  Or, does it mean they are due?  If we win, we face the winner of FLA and ARKY.  ARKY was obviously bad to end the season, but they may be due as well. You can click here for the SEC tourney bracket.

At this point, we have locked up a regional host, and we are hunting a national seed.  As many have pointed out, we have a resume that is almost identical to LSU's whom many consider to be a lock for a national seed.  Some say there isn't room for us and we'd have to take someone's sport. So, why can't we be one?

The answer:  I actually think we can.  A friend of the Cup reminded me that Rice has fallen from grace and did not even win the CUSA.  How can they even be considered for a national seed?  Therefore, I will list his choices (which agree with mine) for a national seed: UNC, Texas, Arizona State, CS Fullerton, GA Tech, LSU, Ole Miss and Florida State.

In order to secure this national seed spot, we have to do well in Hoover.  If your memory isn't that good, we typically do really well there as we've been in the champtionship game 3 of the past 4 years.  Make it to Sunday, and we are a national seed.

In closing, it's been a great regular season.  Each of you should thank me, Brian Walker's Elbow, for lighting a fire under Mike Bianco and causing such a great homestretch.