The Rebs came to play tonight in Fayetteville.  Buk's 6.0 innings were good as he only allowed 3 runs and struck out four.  Not only did the pitching staff come out firing, the Rebel bats came to play as well. 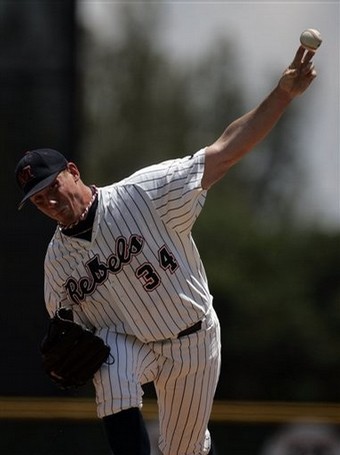 The first inning was full of controversy after the first-base umpire did an about face on one of his calls.  Button had thrown over to Smith at first, and the ump initially called the runner out.  However, the first base coach and Coach Van Horn argued him into changing his mind.  I believe the home plate umpire overruled the call and said that Smith's foot was not touching the bag as he was stretched out to catch Button's throw.  Button was then given an error, and the next batter hit a homerun.  Just like that, the Rebels were down 2-0.

The Razorbacks scored again in the second to make it 3-0.  I was depressed because we continually got base runners but were unable to capitalize.  In the fourth inning, we found some offensive firepower as Henson scored Smith on a double and Philips scored Henson on a SAC fly.  The Rebels trailed 3-2.

Then, there was a big inning.  In the seventh, Button walked to open the inning. Henry then reached on a fielder's choice but advanced to second on the throwing error.   Power then singled, and Henry advanced to third on yet another throwing error.  Snyder walked to load the bases.  Arky changed pitchers to try to avoid allowing runs, but Matt Smith singled to score two.  Then, Henson hit a three run homer.

The Rebels weren't done yet!  Miller walked.  On a Philips single, he sprinted to third.  There was a throwing error trying to get Miller at third, so Miller sprinted home to finish up the 6 run inning.

In the eigth, Matt Smith doubled and stole third.  Then, Henson's single scored him.  That's brings us to the final score of 9-3.

Brett Bukvich had a good night by only allowing 3 runs over six innings which gives him his 9th win of the season (team high).  Even better was Nathan Baker who only allowed one hit over three innings and struck out four.

This win sets an Ole Miss record for SEC victories in a season as we reached 19 wins today.  The previous high was 18 which was reached in both 2004 and 2005.

Mississippi State scored one run in the bottom of the ninth to beat LSU 8-7.

Kentucky dominated Florida and won by a score of 8-1.

Georgia's woes continue as they lost to South Carolina 7-4.

Alabama was losing to Auburn 3-1, but the game was halted by rain in the top of the fourth.

Whoopty doo... What does it all mean?

Well, Ole Miss is tied with LSU for the overall race at 19-10.  Florida is third (in the overall picture though they have clinched the two seed in Hoover) at 18-11.  With Bama in limbo, they are currently fourth.