We really are excited about tennis, alright?  FotC 25 Days a Week, who would be a full time Cupper if he wrote about more than Rebel Men's Tennis, wrote the MFin' cover story for this edition of The Local Voice for us mainly because Ivory Tower is pretty shitty at answering his emails.  Ivory, that could have been you, dawg.  Anyway, his work is after the jump or, as always, you can click the image below for the full PDF of the issue.

Oh, and another thing, how in the Hell did this glorious, magnificient, poignant, and well-hung sports community not get any votes in the "favorite local website" category?  Hmmmm, Cup fans?  I mean, facebook.com as Oxford's 2nd favorite "local website" makes a ton of sense.

We'll get 'em next year. 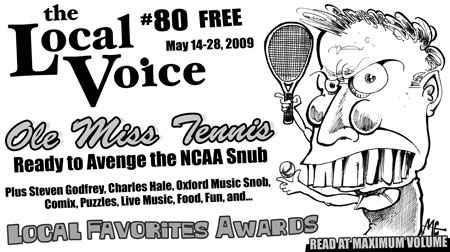 The spring semester having concluded, most students have left Oxford for the summer with a certain sense of finality about them, but many student-athletes have only completed half of their work for the semester. As most people know, baseball season is still in full swing, but let us not forget that the Ole Miss tennis team is currently in College Station, Texas, looking to finish their already impressive season with a bang.

The Rebel netters, ranked second in the nation for most of the season, have already completely another successful academic campaign, highlighted by senior Bram ten Berge’s extensive resume of honors and accolades, and look to take home the Chancellor’s Cup (awarded to the athletic team with the best GPA) yet again. These players truly embody the ideals of the student-athlete as they have raked in numerous individual and team honors in recent years, including ITA All- Academic Team and multiple members of various academic honor rolls. The most impressive aspect of their classroom resume is that it pales in comparison to the team’s athletic achievements.

The success seen by the tennis team on the court in recent years is absolutely unparalleled by that of any other sport. Anyone who has attended a tennis match or read an article online in the past few years likely is familiar with the onslaught of amazing statistics that the netters boast; but for those of you who are not, they include seven straight SEC West titles (see: every year since there have been divisions in tennis), thirteen Sweet Sixteen appearances, three Final Fours, and a number of consecutive wins over State that reaches back to the Great Flood.

The Rebel tennis team has ended the season ranked in the top ten in 12 of the last 14 years. I want you to pause for a second and wrap your head around that. Got it? Now pretend for a second that the football team could say that, or even the basketball team. I seriously cannot even imagine how people would react. What if Ole Miss had won 24 straight Egg Bowls? That would mean that MSU has not defeated us in football in my lifetime; the very thought brings a tear of joy to my eye. You wonder, "Would it get old after a while?" Let me assure you that it feels good every time.

I only say that to put into perspective just how successful our tennis team has been and to provide some incentive to encourage support for them. While our great fans brought home victory in the ITA Attendance Race, we could still have larger, more active crowds to support our best athletic team. With an expansion to the Palmer/Salloum Tennis Center on the horizon, attendance figures have the capacity to rise from their already top-notch status, and the Rebels throughout this season have given fans plenty of reasons to continue cheering them on. The loss of three All- Americans at the end of last season had many Rebel fans worried, but Coach Chadwick came through once again and brought in a great class of freshmen, who have really stepped up and provided a lot of hope for the coming years. This upcoming week is the final chance to see your Rebel tennis team play this season. I encourage all who are able to make a spontaneous trip to College Station, but the matches will be streamed online (barring technical difficulties) for those who cannot. My final piece of advice—since you will certainly be attending tennis matches after having read this article—is this: At college tennis matches, you are allowed to make noise! Of course, respect should be maintained, and blatant taunting is discouraged. But when I see you at our next match, I hope you will be positively deafening.