Terrico White Named Freshman All-American - Several media outlets have tabbed the freshman basketball phenom to their All-American teams.  Congrats are in order for Terrico, but the musculo-skeletal structures in his left knee should fear their continued functionality.  You know how well these kinds of things sit with the Rebel basketball sports gods.

Jerrell Powe Successfully Shedding Pounds - Screw Haley Barbour's campaign to get Mississippians to shed the pounds, because whatever Jerrell Powe is doing works way better than that crap.  According to the Clarion Ledger, the biggest recruiting headache ever may live up to some of his unreasonable hype this fall as he has shed nearly 50 pounds over the last year and gained noticeable quickness.  When asked about the difficulties of weight loss, Powe told the Clarion Ledger that "the hard part is turning that meal down."  What they didn't report was Powe's elaboration on said hard part:

Yeah 'cause this one time coach Decker caught me at Abners taking shots of sauce in between chicken tenders and scolded me something real mean.  He told me I needed to put the junk down and eat more vegetables...  weird shit like 'peas' and 'acavados' or something.

When asked what his favorite vegetable was, Powe screamed "MARSHMALLOWS" before shoving a walk-on guard onto the ground and flashing the landshark fin.

Need a Quick Laugh? - Great!  Friends of the Program has got you covered with an "unfortunate photographic progression" involving the removal of an LSU from Georgia's Foley field during one of last weekend's baseball matchups. 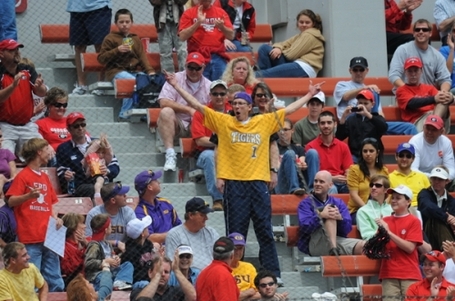 via Friends of the Program