In light of the recent e-crucifixion of Brian Walker's Elbow and Juco All-American for expressing unpopular, negative opinions of our baseball program and coach, I wrote the following überhomerish piece for The Local Voice.

Perhaps I should have submitted it after the Southern Miss game.

Click the image for the full PDF or read the whole bit after the jump. 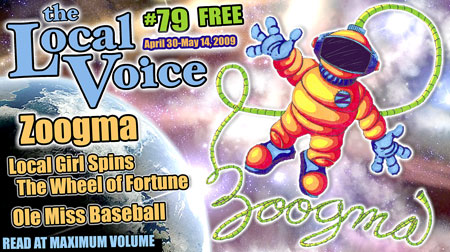 Stand Up And Cheer!

Is this happening? Are we going to do this? Are we really making a run to Omaha?!

As far as I can tell, it looks like it.

After many of us surmised our beloved Rebel baseball team was on the decline after stringing together three memorable seasons (2005-7), this group of baseballers seems as ready for the grand stage that is Rosenblatt stadium as any team Mike Bianco has fielded.

No, we don’t have any Stephen Heads, Brian Pettways, or Zack Cozarts; but we’ve got what seems to be all the necessary pieces to the puzzle.

For example, we’ve got a ballpark.

This last weekend, being my first venture to our fair ham- let to witness Double Decker as an alumnus, I decided that I would watch us take two of three from the then-num- ber one Georgia Bulldogs in the newly renovated Oxford-University Stadium’s grandstands. This dif- fered greatly from my traditional, hazy, distraction- filled "watching" of the game in the now-infa- mous right field student section, but to finally see our incredible new facilities was worth every bit of it. It may have taken our administration a while to get the upgrades taken care of, but they were certainly worth the wait. Everything from the incredible sight lines, to the sun-drenched seats along each foul line, to the new luxury suites have given us a ballpark envied around the country.

It’s been a somewhat recurring theme on The Cup to give the Ole Miss fan base its collective grief for being quiet, ornery, and undeservedly smug. This is especially true for the 30,000 or so Rebels who shudder at the thought of someone standing up or, Jesus forbid, yelling at a football game. This, however, does not seem to be as big of a problem at Swayze Field. Ole Miss baseball fans are seeming- ly cut from a different cloth.

Now, I don’t mean to suggest that there aren’t a few folks telling "uppity whippersnappers" to sit down and hush up at Rebel baseball games, but they’re certainly a part of a pitiful minority. Our baseball stadium has a swagger about it unlike any other in the entire nation because of our baseball fans. The yelling, the clapping, the "c’mon blue," the "throw it in the dirt," and even the viciously rowdy right field crowd have made Swayze a tough place to win ballgames as a visiting opponent.

And, finally, we’ve got a baseball team which has finally hit its stride and can beat any-damn-body they face.

Watching us take a series from a team touted by many as the best in America, especially in the fashion in which we did it, was simply stunning. In the second game of the series, after dropping a close 6-3 decision the night before, the Rebels were down 5-1.

"Here it comes again," we thought. "Here comes another one of those late-season slides where we end up looking stu- pid by barely making it to Hoover let alone a regional."

Yeah, that didn’t happen. We came back, winning 10-8 by waking up our bats, tightening our defense, and throwing our best stuff at them. After that game, I told everyone within earshot of me that we were undoubtedly winning the series. I was right, we did. We picked up a head of steam and never looked back, making the Bulldogs look as if they never had any business being in Oxford after Saturday night.

Upcoming this weekend are the Tigers of Auburn who, if you aren’t paying attention, are horrible at baseball. The Rebels will take two of three from them on the Plains of Alabama and, honestly, should take the sweep. After that, a very tough road series against a quite good Arkansas Razorback team stands in the way as our Rebels’ only real test until the SEC Baseball tournament. If the Rebels can endure those two series with a 4-2, 5-1, or even 6-0 (yeah, I said it) record, the SEC West could be ours for the taking.

Sure, there’s that thing about taking the series against the stunningly awful Bulldogs of Mississippi’s 8th or 9th fairest town, but their whopping fifteen con- ference losses don’t exactly strike fear into my Rebel heart.

Once all of that is said and done with, we could back into being a national seed by winning at least two of our matches in the SEC Baseball Tournament. This would all but guaran- tee a Super Regional in Oxford once again, assuming we win our regional. We’ve got everything it takes to host a successful Regional and Super Regional: great fans, a great ballpark, and a damn great team. We’ve just got to string together the nec- essary wins to earn that right. Let’s get this done, Mike Bianco and company. Finally getting this ball club to Omaha starts this weekend in Auburn, Alabama and I’m thrilled about our chances.