In this edition of The Local Voice, Juco All-American and I explore the bizarre, fraternal relationship among our conference's football coaches and get our shots in on Lane Kiffin.  I mean, everybody's doing it, right? 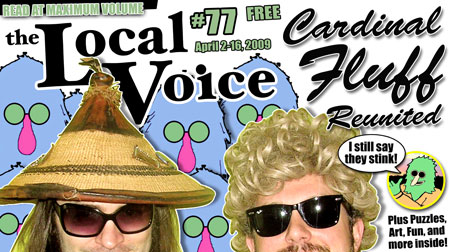 We here at "The Cup" enjoy ruminating and discussing the elite fraternity that is SEC football coaching. Complete with ritual, hazing, and infighting, the coaching fraternity is one which has afforded us nearly as much entertainment as the actual football games. This fraternity, which we’ll cleverly call Sigma Epsilon Chi for the sake of some silly little story we’re about to tell, has had some very, very interesting developments over the last several months, namely their rather sizable pledge class. With gaps left by the recent graduation/expulsion of some of the fraternity’s most interesting members, Gene Chizik, Dan Mullen, and Lane Kiffin were given their bids.

The most interesting of the above is, without any doubt, Tennessee’s Lane Kiffen. As a young coach with an already poor reputation, he has been undeservedly talking smack by calling other coaches on cheating, badmouthing the academics of rival institutions, and predicting a victory over Florida (really, he did that). So, how did all of this go down using our already established allegorical fraternity? Well, now through the miracles of fiction, you, our loyal reader, are given the opportunity to sit in on the bid session that yielded this pledge class of three.

"Corch" Urban Meyer(s), Rush Chairman and Baron Hazertron Pledge Trainer, flashes the first pledge’s photo up onto a screen via projector and begins to read off the pledge’s statistics, anxious to see if this man will meet the criteria of the fraternity’s five point star: Coaching Ability, Recruiting Ability, Squeaky Clean Image, Engagement of Fans, and Hotness of Wife.

"This is Gene Chizik. He played at Florida, but that was back before Brother Spurrier even coached there, so it’s not like that should carry any weight. He pledged Beta XII for two years in a row, but his grades weren’t good enough….Um, yeah I don’t know why we’re even talking about him, but an alum wanted us to talk about him, so I did."

"You just want him because you wanna haze his balls off, Nick," says Nutt.

Coaches Nutt and Saban come to fisticuffs over the PNC (potential new coach), but the fight is broken up, and the coaches vote Chizik in, mostly because, as Saban later pointed out, they need a pledge to haze until he de-pledged.

Next, Meyer(s) puts Coach Dan Mullen’s picture up on the screen. "This is Dan. A lot of you probably already know him. He’s my little brother."

"LEGACY!" the crowd bellows. "We have to at least invite him back for second round."

"Well guys, you’re right. But I just want to make it clear that he doesn’t really mean anything to me. I mean, sure he’s my brother… but… I just replaced him with my offensive line coach. Dan didn’t do ANY work at home. He didn’t even help with the dishes. I had to do EVERYTHING. Anyway, don’t take it easy on him."

Brother Nutt raises his hand and is recognized to speak, "Brothers, let’s say a prayer for young Dan."

"Now, Houston, don’t be stupid, this is stupid, you’re all stupid!" interrupts President Spurrier. "Gah, just, get this damn show on the road, I’ve got a tee time tomorrow morning and it’s your ass if I miss it, Urb."

"Yessir, moving right along," affirms Meyer(s). The slide is advanced and the last face pops up on the screen. Meyer(s) knew it would be controversial which is exactly why he waited until the very end to bring it up. "Okay guys, before anybody throws anything, I just wanted to say something. I hate this guy as much as you do, what with his stupid suggestions about how the fraternity should be run better and his arrogance and his stupid face. That’s why I want to give him a bid. I want every single one of us to haze him until he cries for mercy. I don’t even want YOU to take it easy on him Bobby… Bobby? BOBBY!"

The room looks around; Jr. Active Petrino is nowhere to be found.

Meyer(s) lets out a sigh. "Whatever. Anyway, let’s show this guy that this is Sigma Epsilon Chi, and we don’t take shit from n00bs. I mean, he said that he was going to beat me on the disc golf course! NOBODY BEATS THE CORCH AT FROLF! "

A collective whoo breaks out in the room. Meyer(s) interjects once more, "I mean, he’s been badmouthing our officers! Nick, Steve, and that dork from Georgia have dealt with his crap over the last few months and it is time to make him pay…Also, I’m trying to get something going with his ladyfriend. I mean, have you seen her?"

Suddenly, a door crashes open as the hinges and latch are barely able to contain Brother Les "Bluto" Miles in his angry, inexplicably drunken state. "Hell yeah," screams Miles, "we’re going to fuck that little motherfucker up! I’m gonna make him eat a bunch of spaghetti before running on a treadmill until he shoots puke everywhere! Then I’m going to make him rub peanut butter in his eyes and bang his head on the wall while listening to Mama Mia on repeat! It is over for this plebe!"

So, dear reader, as you can plainly see, Tennessee’s newest head coach and undeserved smack-talker, Lane Kiffin, is going to have a very interesting season come September.