This issue of The Local Voice is pretty solid.  I just now read through the whole thing while doing what I call "not-work" and, let me say, you won't at all be disappointed.  For our contribution to this edition, Ivory Tower, the Cup's haughty wordsmith, does his damndest to explain just how monumentous a season our Rebel Men's Tennis team is having, despite the vast majority of you not at all paying attention or caring.

Click here for the full PDF, or enjoy our bit after the jump. 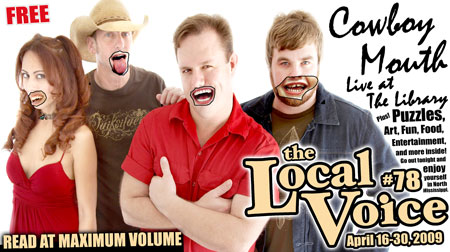 With spring ambling through the calendar and up the thermometer, leisurely morphing into summer, the university is met again with an athletic distraction before finals. Their star was among the most highly-recruited talents in the country coming out of high school, and, note to followers of other teams, his name rhymes with Kevin. The team is still incredibly young, but you take production where it comes. But, most of all, expectations are about as high as they have ever been. People are legitimately calling this team a contender! And, no matter what this weekend brings, beating LSU in Baton Rouge was about as good as cotton candy casserole.

Of course, they will have a tough trip out to College Station at the end of the season. And everyone is expecting that a possible rematch with Georgia in Auburn will be an extraordinary challenge. The thing to keep in perspective is that no matter who ranks us in the Top 5, the only ranking that counts is in May.

Confusion sets in. Everyone knows the Rebels will not play Georgia this season, certainly not in Auburn. And why would even Pete Boone schedule a game in College Station? We are already obligated to visit Starkville – the "McDouble" to College Station’s Big Mac. And, even if our mildly reasonable fans were talking post season (we’re not; take note, ye who are thinking of registering www.geraldpoe4heisman.com), that happens in January.

You’ve been tricked, reader; duped – unless our helpful editors gave it away in the headline – by the Cup into reading about tennis. What is this "tennis," you ask? It is a classic game enjoyed by millions around the world. In fact, according to some specious internet source, there are 1 billion players and watchers of tennis worldwide, making it the fourth most popular sport on Earth. This is important for you, as a Rebel tennis fan, to know because our team is often caricatured for its many international members.

Take, for example, Bram ten Berge, on whom the tennis division of Cup Sports, Incorporated unashamedly admits to having a man-crush. Bram is from the Netherlands. He also fits other stereotypes about Ole Miss tennis players, boasting an impressive academic resume and a wardrobe full of form-fitting European-style casual clothing.

But I do not want to overload you with personal details about players. It is difficult becoming acclimated to a new sport, especially one with a famously funky scoring system, so before you flip back to the front page to see what the hot dog guy thinks of our chances this fall, please stay with me long enough to get what I am calling "The Original Basics of Ole Miss Tennis" – it’s all you need to know, presented in the original, snarky style Ole Miss football fans demand.

Let me begin by attempting to diversify my athletic comparisons. Ole Miss Tennis is like Phil Mickelson circa 2003 – outstanding, but still lacking the big win. Like Duke, Connecticut, or Kansas in college basketball, this is a team – and, I should say, a fan base – that expects the Sweet Sixteen, is satisfied with the Elite Eight, and only really happy in the Final Four. And Billy Chadwick is our Bear, our JoePa, and, God forgive me, maybe even our Johnny V, while Devin Britton – rhymes with Jevan – is our Tebow. What makes this all worthy of your interest is just that 2009 might be our Miracle on Ice, our Sox break the curse, and our Dale wins Daytona rolled into one.

And I do not lightly make comparisons to the Intimidator.

You may have heard that the Rebels are ranked #2 in the country behind the mighty Virginia Cavaliers, but this is no Nebraska meets Miami in a suicide Rose Bowl. The Rebels will enter this postseason with the expectation that there has never been a better chance for this team to win a national championship. Their only losses have come against Top 10 teams, and they have 10 wins against Top 25 teams.

Did I mention that they beat LSU regularly and face a truly terrible Mississippi State team on Friday to finish off a perfect 11-0 record in the conference? You knew, I am sure, that their string of consecutive Western Division titles is just silly, but, for your information, it stands at eight. And you knew, I think, that the perfect ledger includes a thrilling win over the two-time-defending national champion Georgia Bulldogs.

What you need to know, besides the Rebel netters excellence and European sophistication, is that the last thing they have is "middle kid syndrome," a condition some might expect of a consistently well-performing team with a non-existent fan base. The fallacy, of course, is that Ole Miss lacks a tennis fan base; it, actually, leads the nation in average attendance. The information presented to you above has not been your regularly schedule public service announcement imploring you to come watch the foreign exchange students play their exciting game for your cultural benefit. This is not your free, live version of the Wide World of Sports – amateur athletics that make you feel more hip than the football fans. No, it is rather an opportunity to say, simply, that Jonas Berg, Kalle Norberg, and previously mentioned players are pretty badass and that the Cup is following them all the way to College Station, where its going to be like ’62 all over again, but, you know, in the national championship way, not the ugly struggle against integration way.