Rebel Roundup: Links from the Weekend

Share All sharing options for: Rebel Roundup: Links from the Weekend

Jevan Snead to Break Ankle, Ruin Rebel Season - We obviously don't wish ill will on our Rebel quarterback, but receiving positive press has been a curse for Ole MIss quarterbacks in the past.  If things like this article written by Cory McCartney of Sports Illistrated keep coming, Jevan should sleep in a bed of bubble wrap and walk around campus wrapped in foam rubber a la that dweeb from Little Giants.  Oh, and just to set us up for an even greater disaster, Kirt Herbstreit was in Oxford to interview Jevan for a thing he's doing on college football's five best quarterbacks.  Godspeed, young Jevan.

More ACL's to be Torn - In continuing the trend of setting the Rebels up for disaster, ESPN's Andy Katz ranked the roundball Rebs at #22 in his way-too-early preseason top-25.  We're the fourth of 4 SEC teams on the list and sit just behind the #21 LeGhUmPeRz ;P.  All jokes aside, it's great to see that folks haven't simply forgotten about our team's talent and potential.

Nutt's Nutty Wideout Busts a Nut - But not in the gross, not-suitable-for-our-blog kinda way.  Andrew Harris supposedly ruptured a testicle in practice....  ouch.  Fucking ouch for real.  Coaches aren't certain when he'll return.  Oh, and another thing: I wonder how Andrew Harris feels about folks talking about his genitals on the internet.

Bloggeur Misses Home - No news or link here, but this weekend was a tough one for me.  The combination of watching UGA's spring game (hey, it's SEC football of some form) before seeing the pines and azaleas of Augusta National all from the comfort of my overpriced apartment's couch while the too-cold-for-April Atlantic rains drenched my DC area apartment made me really pang for the Deep, Deep South and her special brand of football...  Well, that, and Erin Andrews: 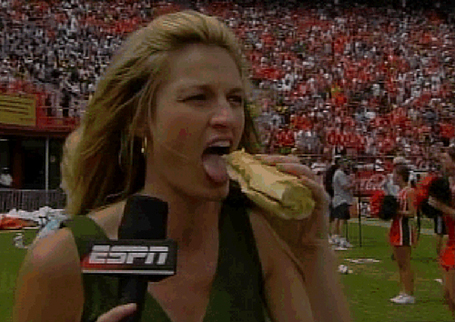 These are going to be a difficult couple of months to stomach.  I mean, after the College World Series and NBA Playoffs what in the hell am I supposed to do?  Watch Major League Baseball?