The Next Government Takeover

Share All sharing options for: The Next Government Takeover

Scene:  In a super-secret strategy room in the basement of the West Wing - this is where the key players in the Obama Administration meet to discuss strategy free from inquiring reporters.  No record is kept of these meetings.  They are not listed on the President's daily schedule, except as "Daily Briefing w/ C.o.S."  But here, President Obama and his Chief of Staff, Rahm "Rhambo" Emmanuel, make the monumental decisions that we will all be talking about in the next few weeks on CNN, MSNBC, Fox News, and the editorial pages of The Daily Mississippian.  Additionally, though, this is where Obama brings the key players in American society and economics to lay down the law.  Today, the president has a special message for a not-so-beloved guest ... 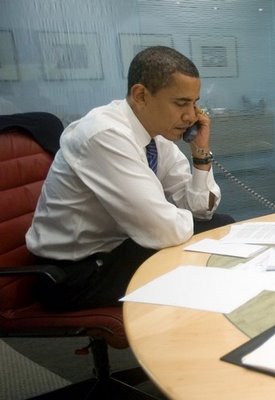 Barack HUSSEIN!!1! Obama:  (speaking into a telephone) Janice, would you tell Rahm to bring our guest down to the bunker?  Yes, you probably should send down those sedative-cookies.  I imagine he will be fairly peeved with us.  He may think that this country is free for him to drive this great American institution into the ground, but I'm going to lay some hope and change down on this jabroney.  What's that Janice?  Yes, I do sound rather like The Rock, don't I?  You know how I've always liked professional wrestling.  Oh, and one more thing, Janice, would you send down a New York Times, a pack of Kools, and some of my American flag toilet paper?  I have to perform my executive duty.  (Janice laugh is audible through the phone receiver.)  That's right, laugh puppet.

The door opens and Rahm Emmanuel is standing there with Ole Miss Athletic Director Pete Boone.

Pete Boone:  Of course, Mr. President.  I'm happy to be called anything other than ...

BHO:  Pete, I'd like to think that you share in my progressive vision of hope for the change that this country needs.  I just want every working American family to take part in the great, audacious American dream.  That's what the stimulus and our budget plan are all about.  The American working family and their hope for something better than what they've had over the last few years.  Do you see where you fit into all this Pete?

BHO:  Now, don't be obstinate with me, Boone.  I'm the President of the United States.  I know how you like to treat my kind down in Mississippi ...

BHO:  Don't sass me, Boone.  And don't interrupt me.  I fired the CEO of General Motors I can make you and your white-hooded croneys disappear into the night, too.

PB:  I really don't understand where all this racial hostility is coming from, Mr. President.  We're a lot different at Ole Miss now.  Remember that totally neat bag we gave you?

BHO:  You can save your plantation intimidation for someone else, Boone.  I want answers!!!

BHO:  See, Boone, that's the culture I'm trying to change.  The culture of no solutions.  You don't have answers, Boone.  That's why you don't fit into this new vision.  I mean can the working families of Mississippi say that, athletically, they are better off now than they were eight years ago?

PB:  I mean, we have done a lot of facilities upgrades and ...

BHO:  I didn't bring you in here to fill me up with false promises that things are going to change.  You are not the change we've been waiting for, Pete.  I am.  Not you.  Me.  Me.  ME!  (Obama lights a cigarette, as he composes himself.)  Cigarette?  They're menthols?

PB:  I'm not sure I under ... Respectfully, sir, I don't think you have the authority to do that.

BHO:  I AM ABOVE THE LAW!  (Obama extinguishes the first cigarette only to light another.  He takes a man-sized drag and rubs his wearied face before inhaling a sedative-cookie.)  Pete, I'm going to take a nap now.  I want your desk cleaned out by tomorrow.  If you're not a part of the solution, you're a part of the problem.  You just don't understand the breadth of the hope and change that we're trying to institute.  It's for the working people.  The hope ... change ... me ...