Download and Read: The Local Voice issue no. 76 PDF
http://www.thelocalvoice.net/LocalVoice-PDFs/TLV-76-web.pdf 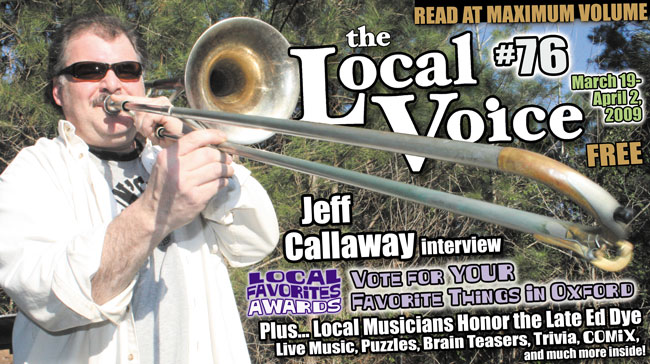 Brian Walker's Elbow contributed to this issue of The Local Voice by introducing us all to the state of baseball in the Southeastern Conference.

Not only are the stadium and warm weather good reasons to visit Swayze, but the Diamond Rebs are poised to be good once again.  After starting the season ranked #6 by Baseball America, the Rebels slid a little bit and it took them a while to find their rhythm.  Winners of eight straight games before dropping game three of the SEC-opening series against Vanderbilt, this baseball team has its act together.

The backbone of this team has a different character than any before as three seniors, Logan Power, Brett Basham, and Scott Bittle all turned down the big leagues and returned to Oxford for their senior seasons.  Power has been especially important thus far in this young season as he boasts a .389 batting average and has racked up 21 RBIs.

The opening weekend was a particularly tough one as the team traveled to South Alabama to participate in the Coca-Cola Classic in Mobile.  All three games were really ugly, and the Rebels only managed to come out with one win.  The following weekend was equally as ugly as rain and snow made the series with TCU an impossibility, and the Rebs dropped the only game played that weekend 13-19.  Just when it looked like things were going to get ugly, Mike's club reeled off an eight game win streak that included a weekend series sweep of Vermont, a midweek sweep of Austin Peay, and two-of-three from Vanderbilt in Nashville.

In the preseason press-conference, Bianco and the assistant coaches seemed to hold to the fact that this team would play "Bianco Ball" which is built on fundamental defense and solid pitching.  Therefore, the nine runs a game the offense averages may come as quite a surprise.  Though the truth about the offense will be known when the team hits the heart of SEC play, all in all, the Rebels have a potent offense with a decent pitching staff.  This combination should lead to a lot of success this season.

One challenge for the Rebels success is the stacked conference once again.  The SEC placed two teams, LSU and Georgia, in Omaha last year, and both teams appear to be the class of the conference as both have had the number one spot in the polls this season.

LSU returned many players off of last year's Omaha team, and they were picked by the league's coaches to repeat as Western Division champs and win the overall conference title.  The Tigers have lived up to the hype so far as they have been strong in the young season and recently took the opening weekend SEC series at home from the Kentucky Wildcats.

Georgia was picked by league coaches to win the Eastern Division and place second in the SEC conference standings.  They recently lost the opening SEC series to Alabama, but the Bulldogs appear to have a solid team thus far and sport a 15-2 record.

This could be one of the strongest years in recent memory for SEC baseball from top to bottom as there appears to be no bottom feeder in the conference.  Many, including State fans themselves, believed that the Bulldogs of Starville were going to have a really rough year.  However, they took a weekend series from South Carolina.  I may be giving too much credit to the Bulldogs, but only time will tell.

Even though Georgia and LSU did clearly seem to be the class of the conference before SEC play began, no one knows just how the rest of the teams stack up against one another.  Most SEC teams open up the seasons with many "patsy" clubs from up North (i.e. Vermont) who haven't played baseball outside since the last time they came South, and our fellow SEC clubs all sport nice records.  As far as the middle of the pack is concerned, one of the shockers on opening weekend was a sweep of the Florida Gators by the Arkansas Razorbacks.  Before the weekend began, no one saw that sweep coming.  It would be considered stating the obvious to say that you never know what might happen on any given weekend in SEC baseball, but I would say that is very true this year.  Hopefully, this is the year that Bianco gets his team to Omaha.