Chris Low - The Next Thomas McKee

Share All sharing options for: Chris Low - The Next Thomas McKee

Last year, one of the Daily Mississippian's sports writers, Thomas McKee, wrote a story breaking down the SEC's five best quarterbacks enetering the 2008-2009 season. Because the DM's website is atrocious, I am unable to find the link to his article to verify this, but I remember McKee placing Wesley Carroll at third, stating that he was the best in the SEC West. How did that prediction work out for you Thomas?

In that same vein, Chris Low, ESPN's SEC blogger recently ranked the top five running backs in the SEC headed into next season.

So, the best halfback in the SEC is...

Anthony Dixon - Really? Hm... Low gives the biggest reason for Anthony Dixon being the best back in the league that an offensive coorinator who wants to envigorate the fanbase told him Dixon has had a good offseason. Also, Dixon will get a lot of touches. Remind me how more touches = more "good." The thing about Anthony Dixon that I keep remembering are his 0.7 yards per carry against Auburn and his 3.3 or fewer yards per carry in six of twelve games last season. I think Anthony Dixon is a good running back. He certainly deserved to make this list. However, to put him first just because of coachspeak is silly for a journalist as respected as Chris Low. 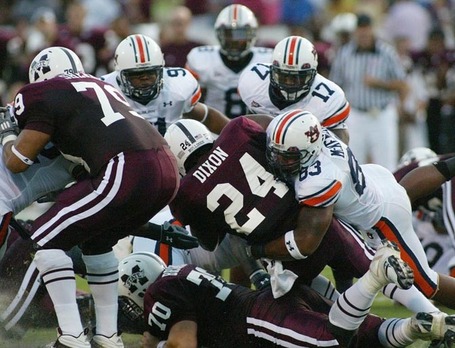 Was this a screen that went horribly wrong, or did MSU simply line up two offensive linemen?

What about Michael Smith, who I think is the best back in the conference? He's third on the list because "the wear and tear of carrying the ball so much eventually took its toll." It could have been stamina issues, or it could have been his PULLED HAMSTRING.

Smith carried the ball 207 times last year and averaged 5.2 yards per carry on only ten more carries than Dixon. He also caught the ball 32 times for 298 total yards. IN Petrino's traditionally pass-happy system, Ryan Mallet will be successful, and Mallet's success passing could stem from Michael Smith's success in the receiving game.

Leaving Dexter McCluster out of the top five because he's practicing with the wide receivers this spring was a cop out. Low knows that McCluster will get his carries out of the I, Single Back, and Wild Rebel, but he puts Caleb King (247 rushing yards last season at 4 yards per carry) and Trent Richardson (a true freshman who has never seen a snap of SEC football. Anyone remember Enrique Davis... pre-season second team ALL-SEC?) ahead of him.

So, even though he obviously won't read this post, this is me saying, "Thanks for the material Chris. I'll be sure to call you out on it in December."