The list kicks off here.  She continues here.  And now, she will come to her glorious end.  Numbers four through one are pretty predictable, so I'll cut the intro short and dive right in.

Dexter McCluster - APB - Still on roster- Do you remember Dexter McCluster's first game?  I do.  He scored our first touchdown of the 2006 season on a Hugh Freeze classic gadget play.  He tallied 268 all-purpose yards--fourth all time in school history for a single game.  He lined up at halfback, wideout, punt returner and kick returner.  And he did it all as a scrawny, mildly-recruited true freshman out of Largo, Florida.  From that game on, I knew Dexter McCluster would do great things for our football team, but I never imagined him being as unstoppable as he can be at times.

In our four SEC wins from this season, only one--Vanderbilt--didn't see a offensive Dexplosion (get it?).  It is hard to argue that, without Dexter McCluster, we would have defeated Arkansas, Tennessee, or LSU.  Over those three games, he had 777 offensive yards.  The Rebels, as a team, had 1,471.  Crunchify those numbers and you'll see that the three biggest wins of this season saw Dexter McCluster personally account for 53% of the Ole Miss offense.

After seeing what he has done this season and what he was able to accomplish last season, I posit that there isn't another Ole Miss Rebel more responsible for our first back-to-back traditional New Years Day bowl appearance than Dex.

Oh, and he's a great guy, to boot.  Anyone who has met Dexter McCluster can attest to his positive attitude, friendly demeanor, and pure love for the sport of college football.  He is one of those guys who truly makes you proud to be an Ole Miss Rebel fan.

Deuce McAllister - HB - 2001 - Deuce McAllister is a ballertron. Even though he was a two-time pro bowl selection in the NFL, casual NFL fans will never know just how good McAllister was at his prime. Deuce finished his college career at Ole Miss with 616 carries for 3,060 yards and 36 rushing touchdowns.  He is also the only Rebel to score a touchdown five different ways: rushing, receiving, passing, returning a punt, and returning a kick.  But even all of that doesn't really tell the story. Before Deuce's knee(s) went out, he was impossible to bring down and super-fast. After his knees went out, he was just impossible to bring down. If only we had seen the NFL career of a completely healthy Deuce McAllister, the nation would know just how good he was.

Maybe more than his immediate impact, Deuce carried our program on his shoulders, to some extent. He and Romaro Miller, in terms of skill players, were the two players that brought Ole Miss out of probation and onto a real stage. Deuce McAllister got people to talk about our program and school at a time when we could have completely fallen off the face of the college football landscape. Sure, we're no powerhouse now, but we're also not Kentucky.  If Deuce hadn't injured himself his senior year, he would have been a serious candidate for the Heisman Trophy.

He is also a fantastic individual who, through his entrepreneurial efforts and philanthropy, does an excellent job representing his alma mater and home state.

For all of that, Deuce McAllister deserves this #3 spot. He's the greatest running back to play for Ole Miss in the modern era.

Eli Manning - QB - 2004 - I remember when Eli Manning signed with Ole Miss. I wasn't anywhere near an avid fan of Ole Miss at the time, but I remember it. Immediately, Ole Miss fans had visions of Peyton Manning 2.0, since Eli was supposed to have all the skill with a stronger arm. Opposing fans pointed to the fact that Eli played at a small private school and wouldn't be anywhere near Peyton's ability (ed: an argument which makes no sense--all of the Manning boys went to Isadore Newman, right?).

In many ways, both parties were wrong. Obviously, Eli Manning was a phenomenal college quarterback, but he never lived up to the Peyton Manning level of hype. He had a solid impact on our program, but he wasn't even able to get us to Atlanta, despite staying until he was a fifth year senior. Still, Eli holds every significant passing record at Ole Miss, and I would guess that most of his records will stick for quite some time.  The impact he had on our program was also phenomenal.  Because of him, Cutcliffe was able to recruit a fantastic offensive line, serviceable receivers, and running backs just good enough to give Eli a decent threat on the ground.  He brought the most media attention our school had gotten in decades, and was even a finalist for the Heisman Trophy.

I remember watching Eli Manning in the Cotton Bowl of 2004 against a creative Oklahoma State defense. Over and over again, they would disguise blitzes until there were five or six seconds left on the playclock only to see Manning audible or pick up a hot route to completely dissect what the defense was sending. That was a special performance to watch which, although one of many, is one I will always remember.

As you all know, Eli is currently the starting quarterback for the New York Giants.  He's done some good things for them.

There has perhaps never been an Ole Miss Rebel which perfectly embodied his position as well as Patrick Willis did.  He is big.  He is strong.  He is fast.  He has incredible football instincts and fundamentals.  He is effective on the blitz or back in coverage.  He never takes a play off.  He is damn near flawless.  Even despite having a broken hand, a tweaked knee, and a nagging foot injury during various points in his career, he was an effective tackler.

The reason that folks will be so quick to throw Eli, Deuce, or Dex above Patrick Willis on a list like this is simply because the only winning season Willis experienced was his freshman campaign--a season in which David Cutcliffe's foolish seniority-based depth chart kept PWillie on special teams and in a reserve role.  No, he didn't play on defenses which won many games, but the fact that he brought some national attention to our program, became a consensus All-American, and won the Butkis trophy all while playing for an absolutely horrible football team says more about him than stats or anecdotes ever will.

While not nearly as well known as Michael Oher's, Patrick Willis' "rags to riches" story is just as revealing to the extent of the young man's character.  Born and raised in hardscrabble, rural west Tennessee to drug addicted and abusive parents, Patrick Willis could have easily been yet another young life wasted.  But it was not to be.  Essentially raising his siblings on his own, Patrick worked odd jobs, bounced among several foster homes, and stayed in school until he was finally taken in by his high school basketball coach.  He stuck through the hard times off the field with an endurance, patience, and demeanor few of us could ever possess.

And, as with many folks on this list, nobody who ever met Patrick Willis had an ill word towards him.  He is a hard worker in everything he does, polite, respectful, and humble.  He is that all-too-rare combination of stellar athleticism and fantastic personality.

Currently, Patrick Willis is terrorizing the NFC West as the starting Middle Linebacker for the San Francisco 49ers.  During his rookie season, he led the NFL in tackles, was named the Defensive ROY, and punched his ticket to Honolulu as a member of the NFC's Pro Bowl team.  Yeah, it's safe to say that the guy hasn't skipped a beat.

So while he may not have the wins and losses other people on this list may have, Patrick Willis is, as we see it, the single greatest football player to wear an Ole Miss uniform in the past ten years, if not ever. 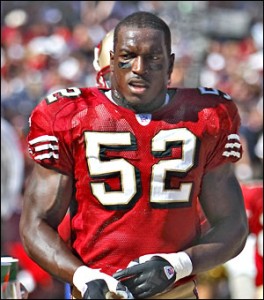 You're makin' all of us proud, PWillie.