Continuing our countdown which we began yesterday, we are revealing numbers 5-8 this afternoon.  As with the last installment, comment and criticize at will.  There's ten whole years of football to talk about here. 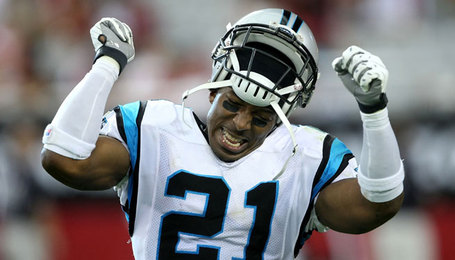 Ken Lucas is really, really excited to be on this list.

Ken Lucas - CB - 2001 - Lucas is certainly the best defensive back to play at Ole Miss in the past ten years. I haven't been following Ole Miss athletics religiously for much longer than that, but I would (blindly) guess that he's the best corner to play at Ole Miss since integration (see: ever). In an era of terrible Rebel cornerback play that featured defensive backs who didn't even have the awareness to pick off or even deflect passes, Lucas stood alone.

Ken Lucas garnered All-American honors in 2000 and was selected in the second round of the draft by the Seattle Seahawks in 2001. He finished his career at Ole Miss with 87 tackles, 7 picks, and 33 passes defended. That's awesome, considering he was a wide receiver until his junior year.  He also returned some kicks and even had two blocked punts on special teams.  Lucas had a brief stint with the Carolina Panthers but was re-signed by the Seahawks in April of this year. 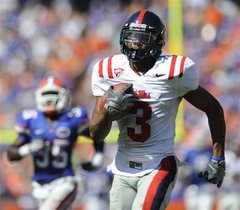 Shay Hodge- WR - Still on roster - As Ghost recently discussed, Shay Hodge just set the single season record for receiving yards by an Ole Miss Rebel. Hodge's impact to the Rebel receiving corps really can't be overstated, especially this season. He has been our everything. But that's to be expected. He has contributed over and over again since the day he got to Ole Miss.

Oh, and Shay, you were forced out, and the Bama player touched the ball before you did. We all know that. Don't worry.  You'll be missed in Oxford and loved wherever it is you end up after the draft.

What picture did you expect us to use?

Peria Jerry - DT - 2009 - In the past 10 years, there have been bigger Rebel defensive tackles than Peria Jerry.  There have been stronger defensive tackles.  There have been faster, more durable, and more highly recruited.  But none have had the motor, awareness, knowledge of the game, and absolute ferocity of Peria Jerry.  If they didn't play for teams I hate with a passion which burns like a thousand suns, I'd feel bad for the SEC guards and centers who lined up against Jerry.  I truly would.  As soon as that ball was snapped, you were in for a world of pain.  No matter how hard you tried, Jerry was going to go over, under, through or around you.  He hated you.  Hell, he still hates you.  If every Rebel defender from this season played with the intensity of Peria Jerry, our defense would have been the SEC's best--hands down.

My personal Peria Jerry moment came during the fourth quarter of last year's Cotton Bowl.  Jerry, Laurent, Powe, Tillman, Hardy, and the rest of the Landsharks had absolutely worn the Texas Tech line out for three straight quarters.  They were ragged.  They were sucking wind, whiffing blocks, and being exposed as the slow, doughy line that they truly were.  All of that would eventually go to their heads when, just as the game was winding down, Brandon "Mudvayne" Carter and Center McGee (a guy whose last name was Hamlin, sorry I forgot and Google isn't exactly being nice to me right now) got pissed off at seemingly nothing and began ripping their helmets off, flailing their arms about, and pointing fingers at Jerry.  Whatever he said or did to them, really set them off something fierce.  They looked like they were about to rumble, but they didn't.  Instead, they both slowly backed up to the Tech sideline, all the while continuing to jaw and gesture at Peria Jerry and company.

Really?  Y'all are some tough guys huh?  Then why is it that you're backing away from the very guy you're trying to pick a fight with.  Peria Jerry has that effect on men: he drives them insane by stomping their brains in. The book on left tackles

Michael Oher - OT - 2009 - What really needs to be said about Michael Oher? He started on the offensive line in his first game as a Rebel. He never missed a game to injury, and he got better every year at Ole Miss. The guy has helped bring national attention to the University through The Blind Side, and he's already excelling in the NFL. There's no point in even writing more here. If there are things you don't know about Michael Oher, read the book.

Tomorrow or later today: Numbers one through four.