The Cotton Bowl Bliss - It's been good to the Rebels

Share All sharing options for: The Cotton Bowl Bliss - It's been good to the Rebels

As part of our educational efforts for the fans, we bring you this segment about the Cotton Bowl.

In Ole Miss' last 8 bowl games, the Rebels have faired 7-1.  The first victory of the eight came against Air Force in the Liberty Bowl in 1992, and the only loss was in the Music City bowl against West Virginia in 2000.  Ole Miss is twelfth nationally in the number of bowl victories.

This bowl success is part of our heritage and history, and the Cotton Bowl has treated us well as we have gone 3-1 in the SBC AT&T Cotton Bowl Classic.  Against whom?  When?  It's after the jump.

In the earliest of Ole Miss' Cotton Bowl appearances, the Rebels defeated the Horned Frogs of TCU by a score of 14-13.  This classic took place in 1956.

75,504 fans attended this thriller and had the opportunity to see Rebel legends Eagle Day and Billy Kinard.  Day passed for 137 yards, and running back Paige Cothren carved the Texas Christian defense for 79 yards.  The Frogs' offense put on a show (by 1950's standards) despite losing their quarterback on the first play of the game.  TCU's All-American running back Jim Swink racked up 107 yards and scored both touchdowns. Both teams scored two touchdowns, but TCU was called for an illegal formation on the extra point.  When they kicked again, the kick sailed wide left.   This was Coach Johnny Vaught's first major bowl victory. 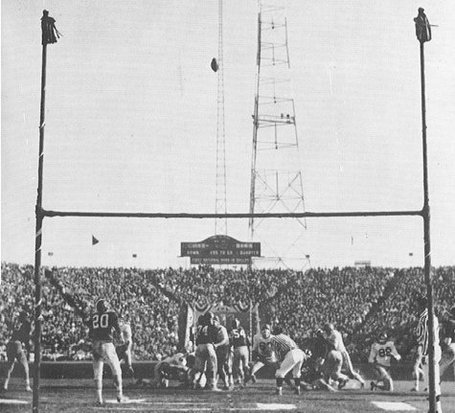 This extra point was the difference for the Rebels. 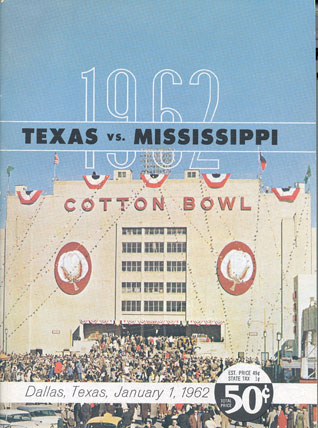 Both Texas and Ole Miss had been number one in the polls that season, and both had disappointing mid-season losses.  Coming into this New Year's Day Bowl, both #3 Texas and #5 Mississippi were 9-1.  Ole Miss was the nation's total offense leader, and Texas was fourth in the country in total offense.  Ole Miss had never lost to an SWC opponent in post-season play.  In this game, the Rebels racked up 319 yards to Texas' 183.  Despite this statistical domination, the Longhorn's prevailed by a margin of 12-7.  The Rebels had one last chance to score in the fourth quarter as they got the ball on their own 45.  On third down, a pass was swatted down.  On fourth and two, Ole Miss QB Glynn Griffing slipped as he took the exchange from center (sound familiar?).  The Rebels never threatened again.

If I'm boring you, you can find the youtube highlights here.  This was Eli Manning's last game under center for Ole Miss, and he delivered. 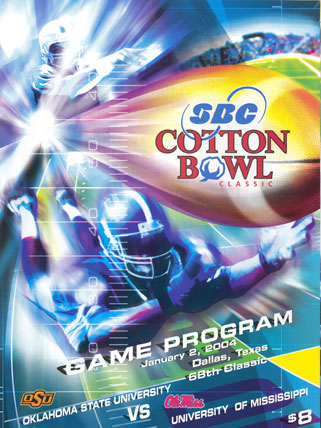 Both teams came into the class with a 9-3 record.  The 16th ranked Rebels defeated the 21st ranked Cowboys.  Manning completed 22 of 31 passes for 239 yards and one interception which earned him offensive MVP honors.  Ole Miss defensive end Josh Cooper was the defensive MVP as he had a crucial fourth down sack.  The Rebels jumped out to a 31-14 lead, and held on in Cutcliffe style to pull it out 31-28.

Texas Tech came in ranked eighth in the country and sporting an 11-1 record, and Ole Miss was riding a five game win streak, 8-4 record, and a #20 ranking.  What ensued was the highest scoring Cotton Bowl ever.  The Red Raiders jumped out to an early 14-0 lead after one successful offensive drive by Harrell and a pick six courtesy of Jevan Snead.  The Rebels regained their composure, Marshay Green grabbed a pick six of his own, and Bolden and McCluster ran all over the Red Raiders.  Graham Harrell set the FBS career TD-pass record by throwing two in the game along with two interceptions.  In the end, the Rebels played well enough to garner a ton of offseason hype and Texas Tech went home disappointed. 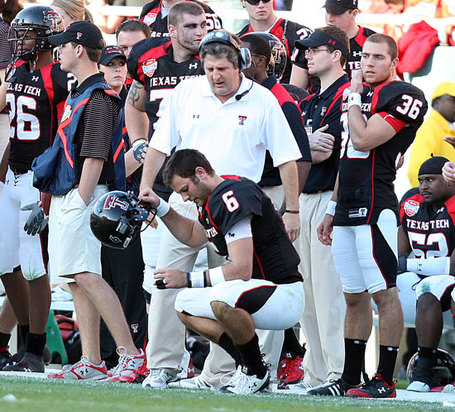 Harrell's reaction when Leach told him he was spending the night in the "chokey."

Who knows what the Classic has in store this year, but, for once, history is on the Rebels' side.