The Ten from the last Ten - Honorable Mentions, 10, and 9

Share All sharing options for: The Ten from the last Ten - Honorable Mentions, 10, and 9

In a few weeks, 2009 will give way to 2010 and, with that, awesomely tacky New Years Eve glasses and a relatively successful decade of Rebel football will become things of the past.  With this, we at the Cup feel it appropriate to recap these last ten years with who we feel are the ten greatest football Rebels of this time span.

After a hearty round of email debate, the top four were more or less decided upon unanimously.  But there was significant contention amongst the remaining selections.  You're welcome, if not encouraged, to contend with our selections as well.

Today we'll have the honorable mentions along with numbers 10 and 9.  We'll have 8-5 tomorrow and 4-1 either Friday evening or Saturday morning, we hope.

Terrence Metcalf - OT - Left in 2002 - Metcalf was, along with Romaro Miller, part of one of the best Ole Miss signing classes ever.  Coming off of probation, Ole Miss was able to ink both Metcalf and Miller--a par of Mississippians on the Parade All-American list--stealing them away from an aggressively recruiting Alabama Crimson Tide program.  Metcalf anchored the Rebel line for many years, earning a reputation as an aggressive, strong blocker.  He protected Eli's blind side during his record-setting sophomore year before going on to a good career with the Chicago Bears.

Romaro Miller - QB - 2000 - Romaro Miller is, statistically speaking, the best Rebel quarterback not named Manning.  Sure, Kent Austin, John Darnell, Stewart Patridge, and even Jevan Snead have done great things in a Rebel uniform, but none were as exciting to watch as Miller.

Derrick Burgess - DE - 2001 - A former first team All-SEC defensive end, Derrick Burgess is now in the throes of a successful NFL career which has seen him make two trips to the Pro Bowl.

Greg Hardy - DE - Still on roster - If it weren't for injuries, gr3gxxz could easily be in this list's top five.  He will undoubtedly go down as one of the most entertaining Ole Miss Rebels ever, both on and off the field.

Chris Spencer - C - 2005 - An all-around good guy and a solid blocker, Spencer was picked up in the first round by the Seattle Seahawks where he is still starting at the offensive center position.

Chris Collins - WR - 2003 - Eli Manning's go-to guy, Collins was the record holder for receiving yards in a season up until just a few weeks ago when Shay Hodge overtook him.

Now, onto the real deal. 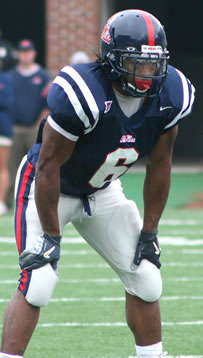 BenJarvus Green-Ellis - RB - 2008
While he will be a relatively unsung hero in the lore of Ole Miss Rebel football, his place as one of our programs greatest runners will not be overlooked by the Cup.  Green-Ellis is only the second Rebel to ever post back-to-back 1,000 yard rushing seasons.  He was a workhorse back who favored lowering his shoulder and driving forward to juking or spinning in order to get an extra few yards.  BJGE was named to the All-SEC first team by the Associated Press after his successful senior season.  As it stands today, he is an oft-used reserve for the New England Patriots. 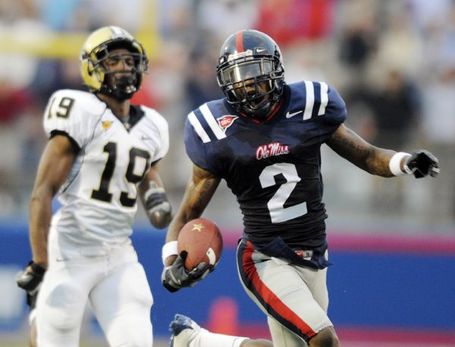 Mike Wallace - WR - 2009 - As one of the fastest Ole Miss players ever, Mike Wallace was Jevan Snead's deep target during the last half of the 2008-9 season.  Perhaps no Rebel has ever been able to stretch the field quite like Wallace, who is now arguably the best rookie wide receiver in the NFL as the third wideout for the Pittsburgh Steelers.  During his final two years in Oxford, he was able to make the secondaries of Florida, LSU, Mississippi State, and Texas Tech look downright slow.  He also performed well in kick return duties.

That's all for now.

A tip of the hat goes to Dr. Saturday for the inspiration and Thile via Twitter for the nudge.