Red Cup Radio
Despite not having a football game this Saturday, Godfrey and I, along with an extremely tardy One Man to Beat, were able to hold an hour-and-twenty-minute-long show.  We discussed Egg Bowl woes, Rebel basketball (quite briefly), the Cotton Bowl, my hot roommate (it gets pretty odd at that point), and pick 'em.

Mark Richt Drops Martinez et al from Staff | Dawg Sports
The biggest piece of news in the conference yesterday came with the announcement that Georgia's Mark Richt decided to clean house after a ghastly 7-5 season in Athens.  This was, apparently, Richt's decision--not the AD's, not some booster's, but his.  So, for a guy with a sparkling reputation as a "nice guy," he can get pretty tough, especially if it means saving his own ass, just as it should be.

Defense Sets Tone | Clarion Ledger dot com
We beat the nonsense out of the Arkansas State Red Wolves to a score of 79 to 57 last night.  Did you see it?  Of course you didn't; the damn thing was in Jonesboro.  Regardless, our defense was stout as was our three point shooting.  One thing about that link though--and it's not just that link, but any Clarion Ledger sports link over the past few weeks or so--is that there are some creepy ass ads over there.  Look at this fucking guy here: 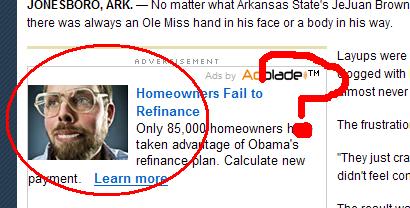 He kinda bears a resemblance to my German Linguistics professor during my senior year at Ole Miss, except horribly ugly.  Look at those nostrils; they're like jet engines.  And are those his bottom teeth or top teeth he's got poking out there?  Or is it glare from a camera flash coming off of this guy's gigantic bottom lip?  And why is his face here in the first damn place?  Regardless, Clarion Ledger, get new ads.

The Blind Side: What's All the Cheering About | TIME
This is obviously written by a State fan:

Michael certainly gets a warm bed, lots of food and familial affection from the Touhys; they gave him a purpose-driven life. But it's their purpose. They drove him there. Michael is like the docile son who pleases his parents by becoming a doctor or lawyer.

Yeah, the Tuohy's really held Oher back from doing what he wanted to do.  That aside, this is a very well written and frank assessment of the film.  It also does touch on the notion that this is just the kind of feel-good stuff white, Southern suburbia loves.  "You see, America, we McMansionites aren't that racist, we swear!"