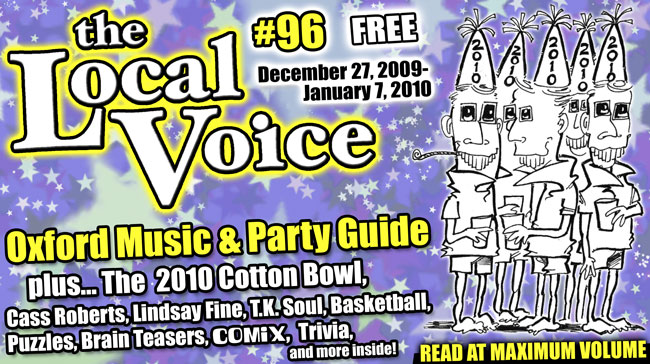 So here we are again: our gridiron Rebels are, once again, squaring off in the Cotton Bowl against, once again, the Cowboys of Oklahoma State University.

I can already hear it now as you read this.  It's a sigh, a collective sigh of disappointment.

"We should be in the Capital One Bowl or, even better, the Sugar Bowl."

"I am tired of Dallas.  Can we please have a bowl game in not-Texas?"

Honestly, I can sympathize.  I was in Starkville on that Friday after Thanksgiving.  I watched our Rebels flush anything better than a trip to the third or fourth most worthwhile city in the Lone Star State straight down the toilet via interceptions, poor defense, and a general lack of anything resembling the swagger necessary to win an SEC football game.  I was miserable.  We lost to a team I hate, coached by a coach I find annoying, in a town I find boring and gritty-and I was the designated driver, to boot.

But-not to encourage some sort of complacency in the face of a loss-I would like to ask us, the disappointed, what exactly we are suggesting with our sentiments.  Are we, fans of the Ole Miss Rebels, a team which has not seen two consecutive New Year's Day bowl appearances, truly upset with the direction our program seems to be heading?

Where were you two years ago during our last loss to State?  I know just where I was: sitting in my parents living room doing my best to enjoy my time off for Thanksgiving.  Our Rebels were leading by two scores headed into the fourth quarter.  Only a highly improbable comeback would have salvaged the Starkville Bulldogs.

As I saw all of that unfold.  As I saw Sylvester Croom gush forth tears like a blathering idiot, proclaiming some all-too-false garbage about his players and the "character" they possessed, I saw what I thought was a program headed in the right direction.  I thought Mississippi State was ready to, at the very least, keep a strong foothold above our Rebels in the SEC pecking order.

Mississippi State, on the other hand, would be hard pressed to say the same.  The 2007 Egg Bowl is the game which ushered Croom's canines to an actual bowl game for the first time in a very long while.  It was the Liberty Bowl-a middle-tier bowl, at best-but certainly a chance for increased stability for a program which has been perhaps the SEC's least stable for decades.  State won, but that would be the last highlight that program would truly enjoy up until their Egg Bowl victory which inspired me to write this in the first place.

Since that miracle season in Starkville, Mississippi State has won nine football games, fired a head coach, hired one, and misspelled the word "Mississippi" on the back of their fancy new jumbotron.  We at Ole Miss, on the other hand, have won seventeen games (lookin' to make it eighteen), fired a head coach, hired one, and properly spelled "Ole Miss" on the back of our fancy new jumbotron.

I know this last Egg Bowl simply, for the lack of anything eloquent or couth, sucked.  I don't deny that.  But our program certainly doesn't suck anymore.  We are making great strides.  These next few seasons will certainly be interesting, but they won't be bad, by damn.

So yes, my fellow Rebels, we could be sitting prettier than we are right now, but we are in damn fine shape.  But as I watch Dexter McCluster, John Jerry, Greg Hardy, and Shay Hodge spend their final moments as collegiate athletes in the worlds most extravagant stadium-moments which will hopefully be victorious-I will without a doubt proudly call myself an Ole Miss Rebel.