Share All sharing options for: Mike Gundy and Mike Leach: A Telephone Conversation

ED: READ THE DISCLAIMER FIRST!  THIS POST APPLIES FOR REALSIES!  KTHXBAI HAVE FUN!

LUBBOCK, TX - A small black telephone quietly rings on the desk of MIKE LEACH, the head coach of the Texas Tech Univerisy Red Raider football team.  The name DAWN MCKAY, his receptionist, flashes on the telephone's caller ID.  Leach, annoyed, slowly lowers his cup of Top Ramen to his desk's surface before grasping the receiver.  He paitiently pulls it to his ear.

ML - Dawn, what?  This was not in the schedule, Dawn.  Why did nobody tell me about th-

MIKE GUNDY - [very loudly with an impatient tone] MIKE just shut up and listen to ME because I am talking to YOU!

ML - How in the hell?  [sighs] Well that's fine Michael [twirls fingers about before scratching his head].  How are you?

MG - Don't even ASK because you know you don't care.

ML - Touche, sir.  I don't care.  I never really have cared about you, if we're being frank.

MG - LOOK MIKE DON'T BE A DICK I am calling for some advice.  ADVICE MIKE!

ML - [curiously] Mike, hey, I don't mean to prod, but do you not find your intonations a bit odd?  I mean, it's just kinda random how certain words come out of your mouth as bizarre shouts and others, well, I guess they're as normal as you're ever gonna get.

MG - I don't even KNOW what in the hell you are TALKING abOUT MIKE!  AND DON'T WASTE my TIME HERE!  You know why I called.

ML - I have an idea, sure.  I'm guessing you want some advice about coaching a team against Houston Nutt's team in a bowl game.

ML - Well, there's really something you've got to know about Houston Nutt, Mike, and it's really the only thing you'll ever need to know about him [mouth remains agape, eyes straightforward, staring at a powered-down computer monitor].

MG - Well LAY IT ON me Mike I need to KNOW BROTHER!

ML - [under his breath] Why in the hell does he talk like Hulk Hogan... [clears throat, now audibly elucidating]Well Mike, he's, um, crazy.

ML - Sure, hold on... [clicks receiver, doesn't get through to Dawn, presses her speed dial button, still no Dawn]...Well damn, Mike.  I'm trying to get my recepti--Mike.  Do you hear that?

ML - [unsettled] Breathing.  Heavy breathing.  It sounds like somebody's on the lin- 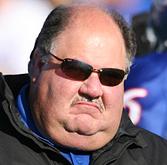 ML - Oh brother, you know, I never know how you're able to do thi-

MM - I AM HERE TO LET YOU ASSHOLES KNOW HOW WE RUN IT...  Also, are either if you fellas looking for an offensive coordinator?

ML - I'm sorry, Mark, but, well you know how Mike and I can be about our offenses and the intricacies ther-

MG - What he's saying Mark is that you're GARBAGE WE DON'T NEED YOU MARK.

MM - [pauses] HEY WELL THAT'S FINE BY ME DICK CHEESE MCGEE I DON'T NEED YOU EITHER I'M THE HEAD COACH IN WAITING AT NOTRE DAME BITCH LOOK IT UP AND LEACH YOUR OFFENSE IS ABOUT AS GENEROUS AND FORGIVING AS THE HUTU TRIBAL LEADERSHIP OF THE EARLY 1990'S.

ML - (confused) I'm sorry, Mark, but did you just compare my playbook to Rwandan genocide?

MM - YEAH I GUESS SO WEIRDO THE FUCK YOU GONNA DO 'BOUT IT?  FREE TIME!  WIKIPEDIA!  AFRICA! MM - YOU MEAN IT BULIT CHARACTER SON THAT IS WHAT I DO I AM A MOTHERFUCKING CHARACTER ARCHITECT AND YOU KNOW IT! 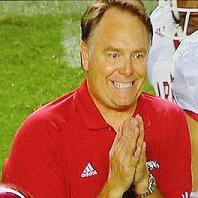 ML - [perplexed, pauses] Oh, I guess Dawn got it to work somehow.

MM - HEY HOUSTON I HEARD YOU WERE TRYIN' TO SNATCH MY JOB YOU GOOFY BUSHEL OF SHIT WELL I HOPE YOU DO AND I HOPE THEY RUN YOU OUT OF THERE ON A RAIL BITCH YEAH THAT'S HOW THEY DO IN KANSAS ROCK CHALK JAY-FIREYOUBECAUSEYOUAREAMEANSPIRITEDBIGOT-HAWK BABY!

HN - Heh, y'all know I ain't goin' for that job son, nor was I ever.  Just gettin' paper, stacks, cheddar, or whatever the kids call it ROPES DON'T LET GO OF THEM!

MG - Well look COACH I've got you HERE with ME, err, US to talk about your FOOTBALL program.  OKAY?!  Let's swap advice, tapes, and such.  Let's make this Cotton bowl COMPETITIVE FOR MEN AND WINNERS ALIKE! 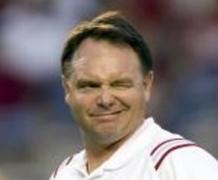 MG - Fatankity Malarkus?  Tere is NO SUCH PLAYER on your TEAM coach!

ML - I really don't have a single Goddamn clue as to how you win football games.  I mean, really.

HN - Scoop it and droop it come on dad gum [throws arms towards the ground, flings head back, shrouds his usually exuberant face with a look of disappointment].

MG - Alright, Houston, I'm going to say this SLOWLY FOR YOU JUST give me some HELP HERE in coaching in the COTTON BOWL HOUSTON!

HN - AT&T, great gifts!  Hospitality!  Really took some ownership!  I don't even know what happened there but [shakes head from side to side, grins] alls I know is yaffankity o'hoolihan GET IT YEAH BABY WHOO Seniors let's go baby on your toes!

MG - BYE MIKE!  HOUSTON, I'll see you in DALLAS, ASSWIPE!  Where my shades at?

ML - Yeah and happy whatever to you too.